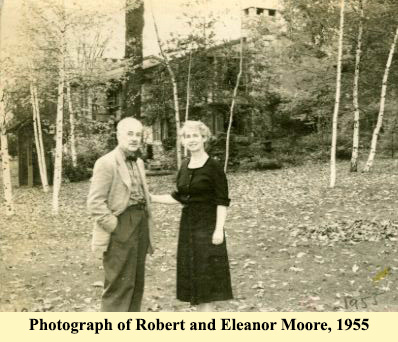 BIOGRAPHIES: Robert Lowell Moore (1896-1986) and Eleanor Turner Moore (1906-1994): Robert Moore grew up on the family farm in Wayland, Massachusetts, attending Harvard College. He took time away from Harvard in 1916 worked as an ambulance driver in France during World War I. In 1917 he enlisted in the U.S. Air Service, serving as a pilot. After the war, Moore attended M.I.T. and graduated in 1921 with a degree in business engineering. He married Eleanor Turner in 1924. In 1934 Moore and his business partner, Ernest Henderson, began acquiring properties in a depressed real estate market, including two hotels that formed the beginning of the Sheraton Hotel Corporation. During the 1950s and 60s the company achieved phenomenal growth. It was sold to International Telephone and Telegraph (IT&T) in 1968. Robert was a member of the Harvard Club of Boston and the World War I Overseas Flyers Association. Eleanor was an artist and book illustrator. The Moores moved from Cambridge, Massachusetts to Concord in 1935 and made their home at 179 Nashawtuc Road. Eleanor was a member of the Concord Women’s Club, League of Women Voters, Ladies’ Tuesday Club, and the Concord Antiquarian Society. In 1964, they were the recipients of Concord’s Honored Citizen Award for their work on behalf of the town. Eleanor and Robert Moore established the Thoreau Lyceum in Concord in 1968, as well as Meditation Mount, a haven for spiritual meditation in Ojai, California. The Moores five had children: Marcia Moore, Robert “Robin” Moore, John S. Moore, William K. Moore, and Paul Fox.

Robert “Robin” Moore Jr. (1925-2008), was the son of Robert and Eleanor Moore. He served as a nose-gunner on a B-17 bomber with the 8th Air Force in England. In 1949, he graduated from Harvard and his first writing assignment was for the Boston Globe on post-war Europe. He is best known for his works The Green Berets (1955), and The French Connection (1969). He is buried at the family plot in Sleepy Hollow Cemetery.

Paul Fox was the adopted son of Robert and Eleanor Moore. He was born in Yatung, Tibet on June 22, 1939. He is buried in the family plot in Sleepy Hollow Cemetery.

SCOPE AND CONTENT: This collection includes printed items and photographs relating to Robert and Eleanor Moore from 1955-1963. It includes photographs of their home on Elm Street as well as their home on Nashawtuc Road (built between 1950-1951). The house stood until 2000, when the new owners demolished it to build a new house on the lot. It also contains the certificate of identity for Paul Fox (the adopted son of Robert and Eleanor Moore).

SOURCE OF ACQUISITION: Donated by Margo Moore, granddaughter of Robert and Eleanor Moore, 2015.

Certificate, “In the Spirit of Concord Friendly Living: we extend A Warm Welcome in the Concord Tradition…,” December 1963

Black & white photo [of Robert and Eleanor Moore outside Nashawtuc Road house], 1955 (with inscription on back, partially blocked by black paper)

Color photo of Johnny [grandson of Robert and Eleanor Moore] and Eleanor, Christmas 1961 (inscription on back)

Color photo of exterior of house [on Elm Street]

Black & white photo of exterior of Nashawtuc Road house in Concord, 1955, with inscription on back (partially covered by black paper)

Black & white photo of exterior of house, “looking from the Japanese Gardens,” of 179 Nashawtuc Road, ca.1958

Black & white photo of interior of house, with description, of 179 Nashawtuc Road, ca. 1958 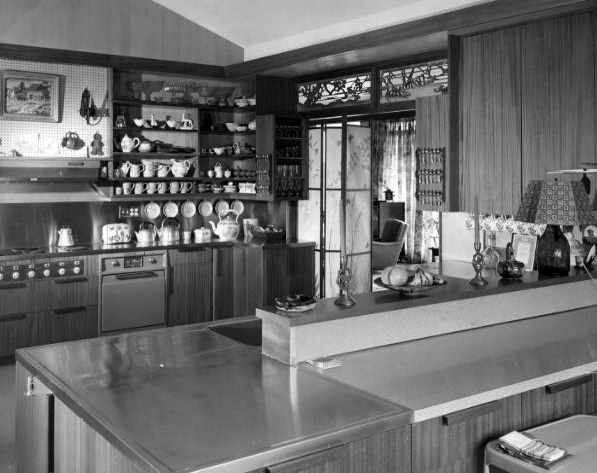