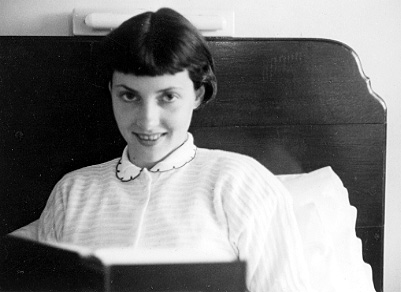 Marcia Sheldon Moore was born in Cambridge, Massachusetts on May 22, 1928, the only daughter of Robert L. Moore, founder of the Sheraton Hotel chain, and Eleanor Turner Moore. She had three brothers, writer Robert (Robin) Moore (author of The French Connection, The Green Berets, and other books), John S. Moore, and William K. Moore. In 1947 she married Simons L. Roof, an aspiring writer, and in 1950 the couple moved from Cambridge, Massachusetts, to Simon Willard Road in Concord. Over the next six years their three children were born: Louisa (Loulie) in 1948, Christopher in 1951, and Jonathan (Jonny) in 1953. In 1955, the family left for an extended trip to India, where Marcia and Simons studied Hindu and esoteric religions. They returned to the United States in the fall of 1957.

Marcia finished her studies at Radcliffe College in 1960. Her senior thesis was published under the title Astrology Today: A Socio-Psychological Survey. In 1961, she divorced Simons Roof and, in 1962, married Louis S. Acker. Thereafter her life became more turbulent. Four years later she married Mark Douglas and moved to Maine, where she and Douglas published a series of books on yoga, including Diet, Sex and Yoga (1966). Her interest in spiritualism and the occult continued to grow. In the late 1970s, she married Howard Alltounian, M.D. (1937-2006) and they moved to Washington, near Seattle. There they led a reclusive life while experimenting with the drug ketamine. Her best known book, Journeys into the Bright World, co-authored with Alltounian, was published in 1978.

On a winter night in January 1979 Marcia Moore disappeared without a trace. Her partial remains, found some distance from her home in Washington and identified by DNA, were discovered in 1981, but the cause and circumstances of her death remain unknown.

Simons Lucas Roof (1920-2008), Marcia Moore’s first husband, was the author of Journeys on the Razor-Edged Path (1959), as well as other books of poetry and philosophy. He was born in North Carolina and graduated from the University of North Carolina. He later did graduate work at the University of Florida and completed four years as a Ph.D. Fellow of the Humanistic Psychology Institute. A graduate member of the Arcane School, he later co-founded the Mountain School for Esoteric Studies where he taught meditation classes. His interest in the transcendent unity of religions resulted in trips to Thailand, Pakistan, Japan, and twice to India, the first time with Marcia Moore and their three children. He last lived in Harvard, Massachusetts.

Eleanor Turner Moore (1906-1994) was Marcia Moore’s mother. Mrs. Moore was an artist and book illustrator. She and her husband, Robert Lowell Moore, established the Thoreau Lyceum in 1968, as well as Meditation Mount, a haven for spiritual meditation in Ojai, California. The Moore’s moved from Cambridge, Massachusetts, to Concord in 1935 and made their home on Nashawtuc Road. In 1964, they were the recipients of Concord’s Honored Citizen Award for their work on behalf of the town.

Robert Lowell Moore (1896-1986), Marcia Moore’s father, grew up on the family farm in Wayland, Massachusetts, graduating from Harvard College in 1918. He was an ambulance driver in France during World War I and later trained and served as a pilot. In 1921 he graduated from M.I.T. with a degree in engineering. In 1934 Moore and his business partner, Ernest Henderson, began acquiring properties in a depressed real estate market, including two hotels that formed the beginning of the Sheraton Hotel Corporation. During the 1950s and 60s the company achieved phenomenal growth. It was sold to International Telephone and Telegraph (IT&T) in 1968.

Dr. Wilmon Brewer (1895-1998) was a poet and author of many books of and about poetry. He also published several books on literature, essays, and an autobiography, and was fluent in many languages, ancient and modern. He earned an undergraduate degree from Harvard in 1917 and a Ph.D in English in 1925. During World War I he served in France, seeing action on the Western Front. Dr. Brewer’s roots in Hingham went back many generations. He and his wife, Katharine (More) Brewer, were philanthropists who donated the Old Ordinary tavern to the town shortly after their marriage in 1922. Late in life they donated the 300-acre More-Brewer Conservation Area where their estate, Great Hill, was located, as well as several other parcels of land.  The Brewers materially assisted Marcia Moore and were godparents to her three children.

SCOPE AND CONTENT:  Most of the correspondence in the collection is made up of letters and postcards written between 1948 and 1964 from Marcia Moore to Dr. Wilmon Brewer and his wife Katherine of Hingham, Massachusetts. The couple had long been friends of Robert and Eleanor Moore, and the relationship extended to Marcia and Simons Roof and their three children, for whom the Brewers served as godparents. The collection also includes fifteen letters from Simons Roof, five letters from Eleanor Moore, and two letters from Lila Roof, all written to the Brewers. The subject matter of the correspondence is mostly domestic, including arrangements for holidays, visits, and other events, expressions of gratitude for gifts, and updates on the children and family life, as well as Simons’s and Marcia’s work and interests. The most frequent correspondence dates from the period between 1955 and the fall of 1957, when the Roof family was living in India. A letter in Folder 7 (July 1- Deember 19, 1956) includes a series of black and white photographs of the Roof children, Marcia Moore Roof, and various travel snapshots. The collection includes Christopher Roof’s birth record from the Concord Town Clerk’s office, as well as several books related to Simons Roof and Marcia Moore.

SOURCE OF ACQUISITION: Donated by Christopher Roof, May 2009.

Folder 12:
Three letters from Marcia Moore to Dr. Wilmon and Katharine Brewer, 1961, including a letter on Astro-Dynamics Research letterhead, 1961