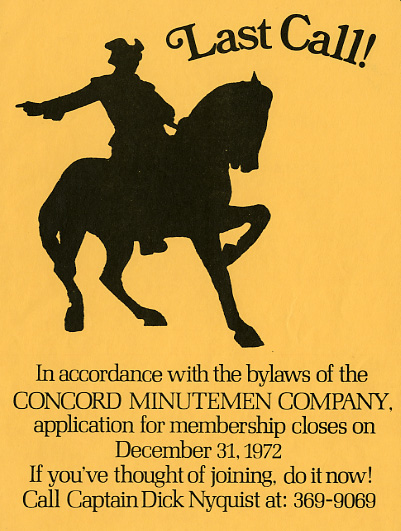 HISTORY: The Concord Minute Men were established by the Concord Board of Selectmen and the Committee on Public Ceremonies and Celebrations on December 10, 1962. Their proclamation declared that such a group was essential for several reasons: the town’s historic connection with the original Minutemen from the American Revolutionary War, the need for a local marching unit to take part in parades and other social and civic events, and to participate in the approaching bicentennial celebration of the events of April 19th, 1775, also known as Patriots’ Day. The newly founded organization began recruiting members, electing officers, writing institutional by-laws, and establishing a basic style of uniform. The first Concord Minute Men Muster took place on January 12, 1963, and the group formally appeared for the first time on April 19th, 1963 for the annual Patriots’ Day Parade in Concord, Mass.  In 1965, the Concord Minute Men were awarded the honor of representing Massachusetts at President Lyndon B. Johnson’s inaugural parade in Washington, D.C., though a lack of preparation and colors at the event prompted the confused presenter, David Brinkley, to inquire aloud, “Now who are these old men coming down the street?” The inaugural parade became an organizational turning point and was later referenced when the group was profiled in Yankee magazine in April 1971. After this initial misstep, the Concord Minute Men designed and received permission to trademark a company flag and continued to participate in events local, regional, and international. 1971. The Concord Minute Men also gave back to the town of Concord through initiatives such as the 1975 Fund, a special gift made to the town during the bicentennial year. After the attention they received as a result of the bicentennial events of 1975, the organization’s membership swelled to 253 men. The group attended regional events and international trips to Bermuda, France, and the United Kingdom through the early 1980s and continue to participate in annual events like Patriots’ Day celebrations. A more detailed history is available in the 1979 Handbook for the Order and Discipline of the Concord Minute Men, SPEC COLL 974.44.

SCOPE AND CONTENT: This collection contains a range of materials dating from 1949 to 2000, including administrative records, manuals and drafts, rosters and muster notebooks, muster newsletters, correspondence, scrapbooks, newsletters and newspaper clippings, event information such as schedules and maps, photographs, and produced related music, art, and poetry. The collection also contains memorabilia consisting of event posters, programs, ribbons, and publications by local and associated groups and organizations.

*RESTRICTION ON ACCESS:  The Concord Minute Men Records are stored in an off-site vault.  To use the collection, researchers must provide at least twenty-four hours advance notice and specific citations to box(es) and folder(s) desired.  Contact the William Munroe Special Collections (978 318-3342) for additional information or to arrange to use the collection.

NOTES/COMMENTS: A significant number of duplicates were discarded during processing.

PROCESSED BY: Alexandra Bernson, May 2016.

Box 1, Folder 50-58
Reports issued by various subsets of the Concord Minute Men including, but not limited to, historian reports, officer reports, and reports of the nominating committee, budget committee, and education committee, 1965-1983.

Box 3, Folders 41-50
Event information for major domestic and international events, trips, or programs such as the Concord Minute Men’s annual Installation Dinners, Bermuda trip, Loyalist Days event in St. John, New Brunswick, Canada, the 1977 Presidential Inauguration, 350th Jubilee in Boston, the Arnold Expedition to Quebec, the London Parade in the United Kingdom, and the Wurzburg Carnival in Germany, among others, 1968-1993.

Box 4, Folders 1-5
Includes program information, reports, flyers, notes, and ticket information about the Patriots’ Day Parade and Patriots’ Day Ball as well as letters to the editor and testimony from Concord Minute Men members regarding changing the public celebration of Patriots’ Day to closest Monday, 1966-1983.

Box 4, Folders 10-19
Newspaper clippings relating to the Concord Minute Men, including articles and photographs of  members from parades and events such as Memorial Day or Patriots’ Day, news regarding Concord, Mass., and obituaries for past members. Organized roughly by subject or event.

Box 5, Folders 1-5
Programs from the Concord Minute Men events such the annual Installation Dinner and events hosted by similar organizations, 1967-1993.

Box 5, Folders 16-18
Materials presented to the Concord Minute Men by various schools as thanks for and recognition of speeches or performances, 1980-1982.

Box 5A, Unfoldered
Ribbons, flags, buttons, certificates, and other mementos from various events, 1975-1982. 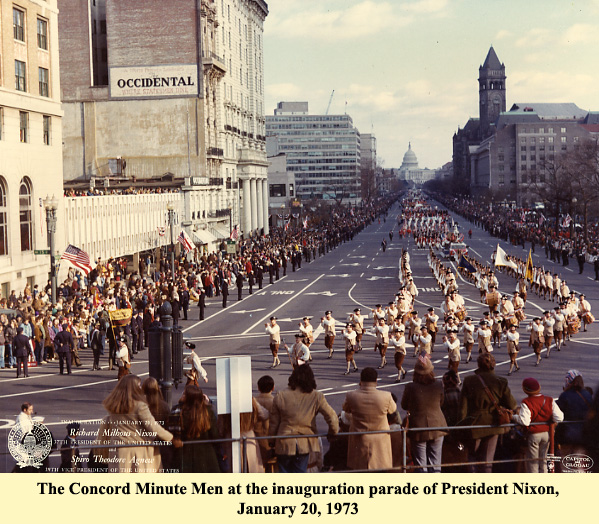