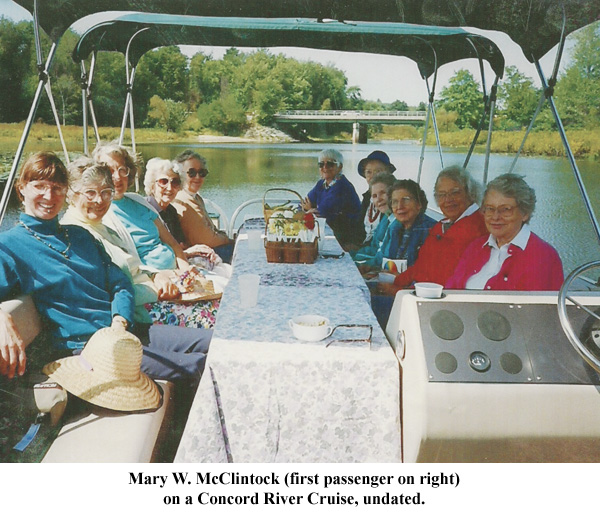 BIOGRAPHY: Born in Greenfield, Massachusetts, Mary Whitmore McClintock (1921-2013) grew up on the family farm in nearby North Sunderland. She attended Northfield School for Girls and then Wellesley College, as had her mother, grandmother and her daughter Martha after her. She married Frank A. McClintock in 1944 and they became the parents of four children. Mr. and Mrs. McClintock were among the founding settlers of Concord’s innovative Conantum neighborhood.

Mary McClintock began working in the then-neophyte computer industry coding (at the time, physically wiring) the earliest proto-computers and was later recruited by M.I.T. to code a secret wartime project to facilitate weather prediction that was used in preparation for the D-Day invasion during World War II. But it was Mary’s childhood on the family farm in the Connecticut River Valley that prepared her for what would become her life’s work: natural history and sharing it with students of all ages. As the result of the influence of her parents, life on the farm, her travels, life experience, and keen powers of observation, she became a naturalist. She developed and taught courses for the Concord Public Schools, the Thoreau Lyceum and Concord Adult Education, as well as training teachers at the Elbanobscot Foundation. A leader in the inner city “Birds Go to School” program, she would catch wild starlings to share with each class, afterwards releasing them out the window.

SCOPE & CONTENT: The collection is made up predominantly of instructional materials associated with Mary McClintock’s work as a naturalist and teacher. These include nature study curricula and related materials, maps, and images. It also contains a box of thank-you notes from those who had participated in her courses and programs, particularly primary school students.

The remainder of the collection is comprised of Mary McClintock’s personal and reference books and a small, incomplete collection of serials.

*RESTRICTION ON ACCESS:  The Mary W. McClintock Collection is stored in an off-site vault.  To use the collection, researchers must provide at least twenty-four hours advance notice and specific citations to box(es) and folder(s) desired.  Contact the William Munroe Special Collections (978-318-3342) for additional information or to arrange to use the collection.

Box 1, Folder 12: Leaf collection, undated
Laminated leaves for use in an activity.

Boxed within Box 1: Letters, notes, drawings, and expressions of gratitude from teachers, students and others, associated with nature education, 1982-2001 and undated

Dana, Mrs. William Starr (revised by Clarence J. Hylander). How to Know the Wild Flowers, a Guide to the Names, Haunts, and Habits of our Common Wild Flowers. New York: Dover Publications, Inc., 1963.

Eaton, Richard Jefferson. A Flora of Concord: An Account of the Flowering Plants, Ferns and Fern-Allies Known to Have Occurred Without Cultivation in Concord, Massachusetts from Thoreau’s Time to the Present Day. Cambridge, Massachusetts: The Museum of Comparative Zoology, Harvard University, 1974.

Ells, Stephen F. The Seasons in Estabrook Country: An Anthology about the Cycle of the Year and this Landscape. (self-published),1999.

Forbush, Edward Howe.  A History of the Game Birds, Wild-Fowl and Shore Birds of Massachusetts and Adjacent States. Boston, Massachusetts: Massachusetts State Board of Agriculture, 1912.

Koeppel, Dan.  To See Every Bird on Earth: A Father, A Son, and a Lifelong Obsession. New York: Hudson Street Press, 2005.

Kroodsma, Donald.  The Singing Life of Birds: The Art and Science of Listening to Birdsong. Boston, Massachusetts: Houghton Mifflin Company, 2005.

Saunders, Aretas A.  A Guide to Bird Songs: Descriptions and Diagrams of the Songs and Singing Habits of Land Birds and Selected Species of Shore Birds. Garden City, New York: Doubleday & Company, Inc., 1951.

Stebbins, C.A. and R.C. Stebbins.  What Bird is That? Sherman Oaks, California: The Valley Vista Press, 1950.

Watts, May Theilgaard. Tree Finder: A Pocket Manual for Identification of Trees by their Leaves. Naperville, Illinois: Nature Study Guild, 1939.

Wilson, Andrew A.  Nature by the Month. Danville, Illinois: The Interstate Printers &  Publishers, 1976.

The Elbanobscot Environmental Education Center: a proposal for a resident facility, undated

Arnoldia, a publication of the Arnold Arboretum of Harvard University, Jamaica Plain, Mass.

The Thoreau Society, Inc.
The following Thoreau Society publications have been withdrawn from the Mary W. McClintock Collection, but copies may be found in William Munroe Special Collections at the Concord Free Public Library: