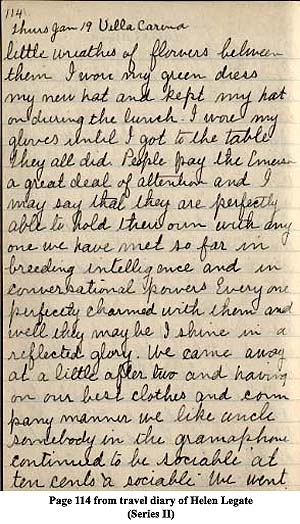 BIOGRAPHY: Helen Augusta Legate (1858-1945) was born in California and spent her childhood in Leominster, Mass., where she lived on Legate Hill. As a young adult, Helen taught at Leominster High School, before moving to Concord, Mass. In 1885, she became principal of West Concord High School and, later, of the Emerson School (formerly located at the corner of Stow and Hubbard Streets).  In 1911, she became the first principal of the Peter Bulkeley School, where she worked until her retirement in 1923, after 38 years in the field of education. Never married, Helen was active in local community organizations. She belonged to the Concord Women’s Club, Ladies’ Tuesday Club, Women’s Parish Association and the Concord Art Association. Notably, Helen was a friend of the Emerson family and at the time of her death she was living in what was once the home of Ralph Waldo Emerson on the Cambridge Turnpike. Helen maintained a friendship with Emerson’s daughters, Ellen Tucker Emerson (1839-1909) and Edith Emerson Forbes (1841-1929), and his son, Dr. Edward Waldo Emerson (1844-1930). Helen accompanied Edward Emerson and his wife and daughter (Ellen Emerson Davenport, 1880-1921) on an extended trip to Europe in 1904 and 1905.

The letters, 1898-1923, were written to Helen by Ellen Tucker Emerson and Edith Emerson Forbes. The letters touch upon daily life activities, mutual acquaintances, local community happenings and occasional visits to the Ralph Waldo Emerson house. All letters are very brief in length.

The travel party spent three months in Europe after traveling aboard the SS Zeeland (no information on this journey is included). The diary describes their visits to various cities in Belgium, Switzerland, Germany and Italy, as well as a two-month period in Antibes, France. Here, the Emerson family, accompanied by Helen, rented “Villa Carina” from a French Viscount. The group spent their days touring throughout the Cote D’Azur and visiting people in the vicinity. The contents of the diary are comprised mainly of Helen’s observations as a tourist; it is not highly personal in nature but it is sometimes humorous. She describes local scenery, artwork and people and she also provides commentary on social visits. Occasionally, Helen mentions friends and family from Massachusetts.

In the January 20, 1905 entry, Helen refers to a letter from William Emerson (son of Edward and Annie Emerson) reporting a deadly muskrat hunting accident in a canoe on the Concord River, in which seventeen year old Sam Hoar shoots Clarence E. Jones, son of Boston Banker R.H. Jones.

Helen’s references to the Emerson family in the diary focus on describing day-to-day activities with the various family members—visits to museums and tourist attractions, countryside excursions, shopping, dining, errands and the like. Helen also comments on the Emersons’ many good qualities—kindness, refinement, cultivation, intelligence, breeding and conversational powers.

The photograph included with the collection is a copy of an original (n.d. pre-1909) showing Helen Legate, Ellen. T. Emerson and Grace Heard on the Ralph Waldo Emerson family property, by the barn.

SOURCE OF ACQUISITION: Presented by Joan T. Fleming, 2009 and 2010. Letters and photograph were deposited via the Emerson Society, the diary presented as a gift directly by Mrs. Fleming.