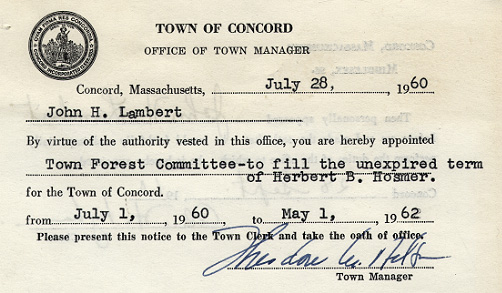 BIOGRAPHY: John H. “Jack” Lambert, Jr. was born in Lowell, Massachusetts, on March 8, 1906, to Dr. John Lambert Sr. and Mabel F. (Forrest) Lambert. He attended the University of Maine, from which he received a B.S. in Forestry, and Yale Forestry School, where he obtained a degree in Forest Management. After graduating, he worked in the forestry department of the Hollingsworth and Whitney Paper Company in Waterville, Maine. He began work for the state of Massachusetts in 1932. From 1932 to 1942 he worked as Forest Supervisor for the Massachusetts Department of Conservation, with responsibility for a number of forests in the Berkshires. From 1942 to 1944 he worked as District Fire Warden for the northern half of Worcester County and the eastern half of Franklin County.  He moved to Concord, Massachusetts, when he was transferred to Boston in 1944 and worked as Forester for the Massachusetts Department of Conservation or Natural Resources until 1962. From 1962 to 1975 he worked as Chief Forester for the Massachusetts Department of Natural Resources. In 1963 and 1975 he served six-month terms as Acting Director of the Massachusetts Division of Forests and Parks and in 1976 he was appointed Director. He retired from state service in 1976 and practiced consulting forestry to Massachusetts forest landowners from 1976 to 1982. While residing in Concord, John Lambert was a member of the Concord Recreation Commission, the Concord Town Forest Committee (serving as Chairman from 1963-1967), and the Concord Natural Resources and Conservation Commission (serving as Chairman from 1970-1972). He was the recipient of many awards, including the title of “Fellow of the Society” from the Society of American Foresters. His first wife, Althea Clark Lambert, predeceased him. They had three sons, Clark, Steven, and Roger.  His second wife was Amy (Campbell) Burk Lambert. In 1982, Mr. Lambert moved to Dover, New Hampshire, where he remained until his death on January 27, 1998.

SOURCE OF ACQUISITION: Donated by the Massachusetts Department of Conservation and Recreation Archives; received 2008 August 20.

ASSOCIATED MATERIALS: the Hapgood Wright Town Forest, by Edith Sisson; Collection of materials issued by or relating to the Recreation Commission, both in Concord Free Public Library Special Collections. 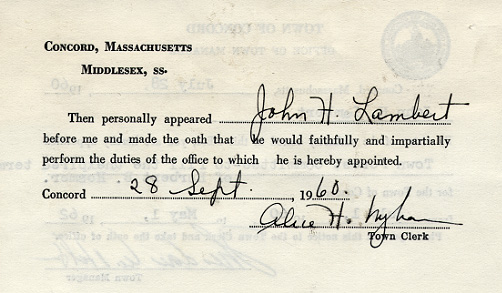