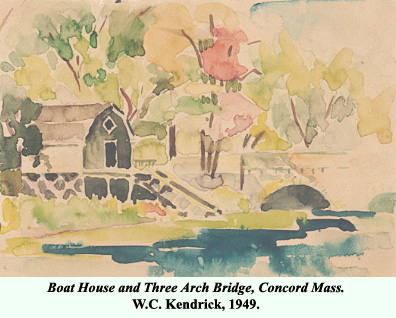 BIOGRAPHY: John (Jack) Storey Kendrick was born in Chicago in 1911 and studied landscape architecture at the University of Illinois, Urbana, graduating in 1934. In 1932, he married Wilma (Billie) C. Haeger of Oak Park, who had received a degree in education from the University of Illinois. Following a nine-year stint with the National Park Service, John Kendrick accepted a job as a design engineer at Raytheon, in Waltham, Mass. With their first son, the couple moved in 1943 to Concord, where their second son was later born; a decade later, Wilma Kendrick would write that she “‘discovered’ Concord and thus became a more ardent Concordian than many a native.” John Kendrick eventually moved into a management position at Raytheon, and also took on landscape architecture projects, from 1953 onwards sometimes working in association with the modernist architect Henry Hoover, who lived in Lincoln. Wilma Kendrick was involved with the League of Women Voters, taking an interest in matters about Concord schools. In 1958, the family relocated to Santa Barbara, California, where John Kendrick died in 1961, and where Wilma Kendrick celebrated her 100th birthday in 2010.

SCOPE AND CONTENT: 73 items dating from 1941 to 2002, primarily consisting of technical drawings created by John Kendrick during his time at Raytheon and in his landscape architecture and planning projects, including tracings, blueprints, and a handful of surveys. The collection also includes smaller numbers of clippings, ephemera, correspondence, transcriptions from a diary, a small watercolor painting, transcriptions of two conversations, and a color photograph, primarily created or collected by Wilma Kendrick. A framed map of Concord and a pipe cleaner figurine complete the collection. All materials relate to the period in the 1940s and 1950s when the family lived in Concord, although some were created or reproduced decades later.

SERIES DESCRIPTIONS:
Series I. Design engineering, (1943-[1952]): Contains five technical drawings and one color photographic print from John Kendrick’s years as a Design Engineer at Raytheon; they show an oscilloscope, a portable power supply for flash equipment, and an Electrodyne Stimulator. While only two drawings are signed by Kendrick, the others are recognizably in the same style and handwriting. As John Kendrick had moved into a management position at Raytheon by 1952, this may be taken as a likely end date.

Series II. Concord area drawings and architectural drawings, ([1950s]): In three subseries. Contains almost thirty plans and drawings, including surveys, connected with the Adams Estates in Concord; a sequence of about a dozen sketches and drawings John Kendrick made for a modernist house in Lincoln; and an handful of miscellaneous drawings.

Series II, Subseries A. Adams Estates in Concord, Mass., (1952-1954): Surveys, site plans, road profiles, and associated documents relating to the design of the Adams Estates subdivision, located west of Concord Center off Elm Street. John Kendrick served as the Site Planner for the development; he also owned adjacent property. Many tracings, some drawings on graph paper and drawing paper, and some blueprints (both traditional cyanotype blueprints as well as whiteprints). Not all documents are in Kendrick’s handwriting; some may have originated with the project’s surveyors, the civil engineers Miller and Nylander.

Series II, Subseries C. Miscellaneous drawings and plans, ([1950s]): Contains a plan Kendrick made for the grounds of Trinity Episcopal Church in Concord, a map of routes to the Concord Antiquarian Society, two blueprints with no apparent connection to Kendrick, and a drawing of an information kiosk.

SOURCE OF ACQUISITION: Given by Philip H. Kendrick.

NOTES/COMMENTS: Accessioned September 2009 and April 2010 (both accessions given a single number); AMC 184.

Tube 1:
Two drawings on Raytheon paper of an oscilloscope in isometric projection, in Kendrick’s handwriting. Unsigned and undated, [1943-1944].

One drawing on Raytheon paper showing an Electrodyne Stimulator in isometric projection, with smaller views in orthographic projection, in Kendrick’s handwriting. Several versions of a script typeface for the words “Electrodyne” and “Stimulator” are plotted out below the device. Left edge of paper missing. Unsigned and undated. 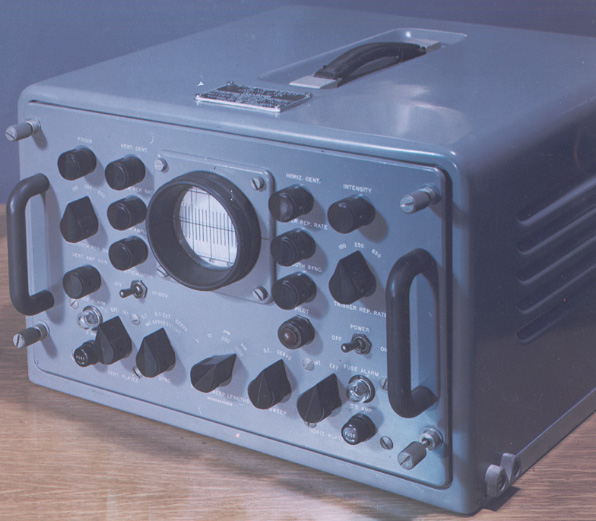 Oversize folder 1 (outside box):
Large-format photographic print of an oscilloscope, apparently in a ship’s cabin. On back of print, in Wilma Kendrick’s handwriting: “The Ratheon [sic] Radar, designed by John S. Kendrick during 1943-44.” Date of print unknown.

Tube 2: Surveys:
Whiteprint of a survey of the Adams Estates area, showing traverses and other features. Undated and unsigned.

Tracing showing elevations and placement of trees, with some shaded in green. Undated and unsigned.

Whiteprint, apparently made from an earlier version of previous item (tracing), showing elevations and placement of trees. Undated and unsigned.

Tube 3: Site plans:
Tracing of “Site Plan for the Adams Estates,” in Kendrick’s handwriting, with west at top of map. The ownership of one lot suggests that the item was created before November 1953; undated.

Three whiteprints in unknown handwriting of the Adams Estates subdivision. The smaller version includes notes in pencil of the prices of several lots, with some marked as “sold.” Dated December 4, 1953.

Seven numbered drawings on graph paper, signed by Kendrick, showing cross sections of Park Lane and Lewis Road, with notes about property lines, surveying landmarks, and changes to be made to the land. Dated February 21, 1954 through March 7, 1954.

Tracing of area extending beyond Adams Estates to the river, showing a total of 45 lots, some of which have been partially filled in and shaded in red and green, in Kendrick’s handwriting. Unsigned and undated.

Series II, Subseries B. Plans for a house in Lincoln, Mass., (undated)

Tube 6:
Tracings of seven elevations, including an interior elevation. Unsigned and undated.

Tube 7:
Tracing and whiteprint of “A Preliminary General Plan for the Development of Grounds: Trinity Church, Concord, Mass,” in Kendrick’s handwriting. Shows the footprint of the church and its recently proposed extension in relation to public walks and River Street. Includes a legend for interpreting the numbers on the plan, which represent names of plants, along with quantities for each plant, its common name, and its botanical name. Notes cover eight “Items that could be done now.” Unsigned, dated January 1, 1950.

Tracing of “Routes to the Concord Antiquarian Museum,” in Kendrick’s handwriting. The Antiquarian Museum is prominently identified, along with eleven other attractions around Concord Center, including the Minuteman Statue, the Concord Free Public Library, and the Emerson House. Unsigned and undated.

Blueprint of a survey in West Concord, attributed to A.A. Miller, C.E. Undated.

Oversize folder 2 (outside box):
Perspective drawing in pencil of “An Information Kiosk, for Concord, Mass.,” in Kendrick’s handwriting. Depicts a small structure with a half door, a window, and a sign reading “Information,” with sketches of surrounding vegetation. (The visitor’s booth that originally stood on Monument St., later moved to Heywood Meadow?) Unsigned and undated.

Box 1, Folder 1:
Four items pertaining to 1949 School Questionnaire and related contention over schools in Concord. Includes a letter from Lawrence Terry, then the headmaster of Middlesex School, to Wilma Kendrick, and three newspaper clippings, the last dating from March 1950.

Box 1, Folder 2:
Ephemera from the 175th Anniversary Celebration of the Concord Fight. Four items include a program for an April 17, 1950 concert by the United States Marine Band, a ribbon for the Anniversary Ball on April 19, a ticket for the same, and a flyer describing “Literary Exercises” scheduled for April 19.

Box 1, Folder 3:
Ruth R. Wheeler’s 1957 Our American Mile. Inscribed “for Mrs. Kendrick with the regards of the author.”

Box 1, Folder 4:
Transcribed extracts from a diary kept by Wilma Kendrick; entries span a period from 1941 through 1953. Describes the period before the family’s move to Concord, the circumstances of their relocation, and Wilma’s warm feelings toward the town, “a wonderful place for children and dogs.” In sporadic entries she reflects on family news, world and political events, and John’s work at Raytheon as well as his return to landscape architecture. She describes in some detail her own experience making parts for Raytheon with several other women, operating first out of a pantry, then a small room in the Kendricks’ apartment, and finally a room above a drug store. Date and agent of transcription not noted.

Color photograph of an item identified on the back as an “Aluminum C.T.R. (?) Mounting Ring, Radar Component for Raytheon Co., 1943-1944,” manufactured in the circumstances described by Wilma Kendrick in her diary. Date of photograph not indicated.

Box 1, Folder 5:
Watercolor painting, labeled “Boat House and Three Arch Bridge, Concord Mass” and signed W.C. Kendrick. After WWII, the Kendricks moved into a house on River Street that was very near the South Bridge Boat House, living there until their move to California in 1958. Dated 1949.

Box 1, Folder 6:
Two transcriptions of conversations between Wilma Kendrick and Philip Kendrick, her son, while the two watched home movies dating from 1947 to 1954; the conversations took place in January 2002 and August 2002. The two reminisce and react to family and Concord events as they appear on the screen. Date and agent of transcription not noted.

Box 1, Folder 7:
Three postcards. One, undated and unsigned, wishes the recipient a “Merry Christmas and Happy New Year.” Two postcards from “El” depict scenes from Concord’s history; one shows a rider on horseback warning two figures “To arms! To arms! The war has begun!”, and the other represents the Concord Fight. Both were sent to Wilma Kendrick after the family’s move to Santa Barbara.