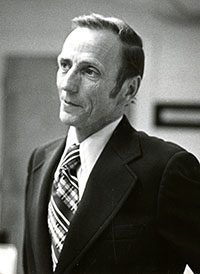 Organization and arrangement: John H. Loring’s daughter, Tamara Loring, organized most of the collection chronologically and that original order was maintained, as it gives context to the materials, photographs, and documents that otherwise are unlabeled. Many of the donor’s explanatory notes remain as well. The remaining material is arranged topically and within each section, chronologically. Photographs are included in both “Chronology” folders and separately, as they were donated.

Biography: John H. Loring was born in Concord on March 5, 1926 to Howard and Mary Loring. He graduated from Concord High School and served in the Army in World War II. He earned an engineering and business degree from Northeastern and worked as a chemical engineer before turning to politics. In 1972, Loring-- a member of the Republican Party-- ran and won the seat in the Massachusetts House of Representatives for the 33rd District, representing Acton and Concord for the next two years. He lost the race for the 48th District, representing Maynard and Acton in 1974, and won in 1976. His longest tenure in Congress was serving the 14th District: Acton, Carlisle, and Concord, from 1978-1988. He lost his last race in 1990 and retired from politics after sixteen years of service.

Loring’s primary interests were on taxation, housing, urban development, and public safety. He was on the Steering Committee for Legislative Rules Reform, Ways and Means, Public Service, Energy, State Administration, and Ethics Committees.

Loring was married to Tatiana Farley. They had four daughters: Cynthia, Tamara, Pamela, and Susan. He enjoyed golf, was a member of the West Acton Baptist Church, and involved with the Boy Scouts. He was involved with the board of directors for Emerson Hospital, Middlesex Savings Bank, Acton Republican Town Committee, Boy Scouts, United Way, and the Mental Health Association of Central Middlesex.  He died on July 11, 1993.

Notes/comments: Some materials retain the donor’s explanatory notes. Researchers should take extra care not to separate these notes. Acton Historical Society retains some of the family materials.