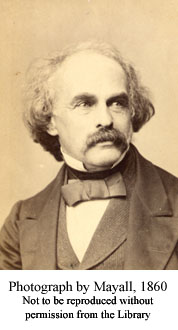 ORGANIZATION:  Organized in a single sequence.

Hawthorne served a long, slow literary apprenticeship before achieving national recognition.  He published Fanshawe, his first novel, at his own expense in 1828, and went on to make a modest reputation based on stories first published in gift books and periodicals and then collected in book form.  He wrote for The Token and The New England Magazine, edited The American Magazine of Useful and Entertaining Knowledge (1836), and compiled Peter Parley’s Universal History (1837).  His children’s books—which he wrote to generate much-needed income—included Grandfather’s Chair, Famous Old People, and Liberty Tree (1841), Biographical Stories for Children (1842), A Wonder-Book for Girls and Boys (1852), and Tanglewood Tales (1853).

Twice-Told Tales was published in 1837.  Between 1839 and 1841, Hawthorne was employed in the Boston Custom House.  He lived in 1841 at Brook Farm, the West Roxbury utopian community.  In 1842, he  married Sophia Amelia Peabody and moved to the Old Manse in Concord, remaining until 1845, when he moved his family to Salem, where he became Surveyor of the Port.  (The Hawthornes had three children—Una, born 1844; Julian, born 1846; and Rose, born 1851.)  His collection Mosses from an Old Manse was published in 1846.

Hawthorne’s literary reputation skyrocketed when Ticknor, Reed, and Fields (later Ticknor and Fields) added him to their literary stable and published The Scarlet Letter—his first romance—in 1850.  The House of the Seven Gables (written in Lenox, Mass., where the Hawthornes moved from Salem and where Hawthorne became acquainted with Herman Melville) appeared in 1851, The Blithedale Romance in 1852, and a campaign biography of Franklin Pierce in 1852.  After Pierce’s election, Hawthorne became the American Consul at Liverpool (1853-1857), following which he and his family spent two additional years traveling in Europe, returning in 1860 to Concord, where he had earlier purchased a house (The Wayside).  The Marble Faun was published in 1860, Our Old Home (controversially dedicated to Franklin Pierce) in 1863.

During his final years, Hawthorne began several works, including The Dolliver Romance, which remained unfinished at his death and which, like his journals, were edited and published posthumously.

PUBLICATIONS BASED ON USE OF COLLECTION:

Holograph manuscript of first chapter of The Dolliver Romance, in the hand of Nathaniel Hawthorne, prepared for publication in The Atlantic Monthly.  Manuscript titled by Hawthorne “Fragment of a Romance”; chapter titled “The Brazen Serpent.”  The chapter appeared in the Atlantic for 1864 July under the title “A Scene from the Dolliver Romance.”  This manuscript was placed on Hawthorne’s coffin during his funeral service in Concord.