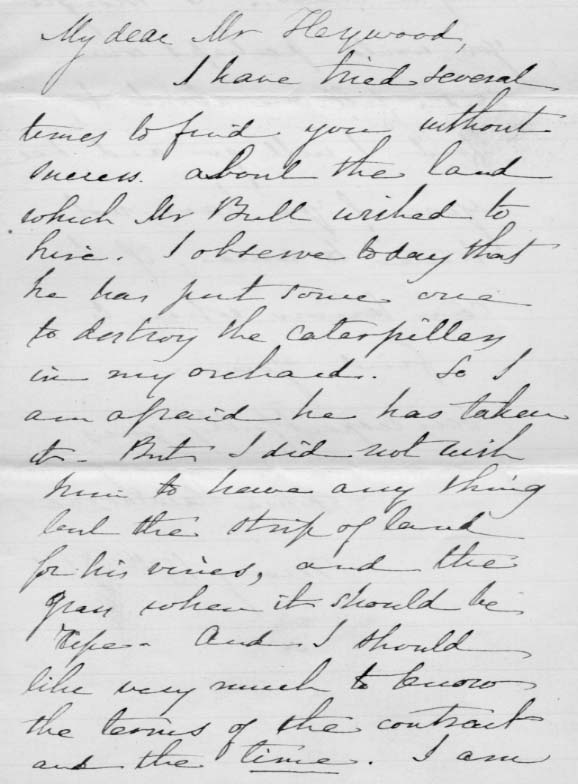 BIOGRAPHY:  Author Nathaniel Hawthorne (1804-1864) lived in Concord during three periods of his life--from 1842-1845, from 1852-1853, and from 1860 until his death in 1864.  He married Sophia Amelia Peabody in 1842.  Their children: Una (born 1844); Julian (born 1846), and Rose (born 1851).  Hawthorne’s daughter Rose became Rose Hawthorne Lathrop, and later, as Mother Mary Alphonsa, a founder of Dominican Sisters of Hawthorne.  One of Julian’s children, Hildegarde, later became Mrs. Hildegarde Hawthorne-Oskison.  Manning Hawthorne was Julian’s grandson.

SCOPE AND CONTENT:  Correspondence, 1861-1935, includes two letters from Sophia Peabody, one to Mr. Heywood, the other to Mr. Holden.  The letter to Mr. Heywood (1865) details the leasing of land in Concord.  The letter to Mr. Holden (1869) concerns the packing of breakable items. One letter from Rose Lathrop to Mr. Bartlett is about assistance with a forthcoming book.  The correspondence addressed to Mr. Robinson focuses on the condition of the Hawthorne family plot at Sleepy Hollow. A letter from Rose H. Lathrop to Edward Bok (editor of the Ladies' Home Journal) requesting copes of the Journal with "Miss French's Sketch of me in it?"