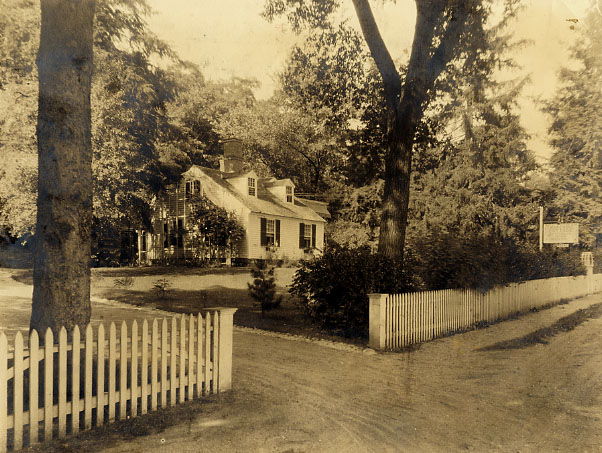 Organization and Arrangement: as mounted by compiler.

History: Located at 491 Lexington Road, Grapevine Cottage is one of the only remaining first period 1-1/2 story central-chimney cottages in Concord, although the house has been much altered over time. It has additional significance as the home of Ephraim Wales Bull, who developed the Concord Grape on its property. A trellis against the cottage wall supported the original Concord grapevine; the vine currently found on the property is a shoot from the old root.

The cottage was occupied by Thomas Ball in 1716, purchased by Thomas Munroe in 1737, then sold to John Savage and to Timothy Wheeler III in 1749. It was subsequently owned by Kendall Bryant and rented out to Thomas Bryant and his son Reuben. It was then rented to Nathaniel French until his death in 1834.

Ephraim Wales Bull moved to Grapevine Cottage around 1836. He was born in Boston in 1806 and married May Ellen Walker in 1826. A goldbeater by trade, he pursued horticulture as a hobby. He developed the Concord Grape in 1849, and introduced it to the market in 1854. Bull served as a state representative, senator, and on the Board of Agriculture. He moved to the Concord Home for the Aged and died in 1895.

Mrs. Daniel Lothrop purchased and refurbished the cottage at the end of the 19th century; she began calling it “Grapevine Cottage” and rented it out to Frank Ivers; Roy Rolfe Gilson; Samuel Hoar, Jr.; and Raymond P. Baldwin. Miss Mary C. Tobin (later Mary Tobin Callahan) opened a tearoom there in 1928. Sidney B. Whittier owned the cottage ca. 1956-61.

Scope and Content: Scrapbook compiled by unknown former resident of house, possibly Sidney B. Whittier. It contains items dated between 1880 and 1958 (including many undated). Contents include:

By Howard S. Andros and AHF.

To S.B. Whittier (1955-58) from H.B. Richardson from the University of California Agriculture Extension Services and from Longwood Home Modernizing Corp.

Also a reading list from the Massachusetts Horticultural Society, a poem by Frances Liliensterie, and an invitation to the opening of the cottage in 1931.

Articles about the cottage and its tenants, including Ephraim Wales Bull, a house fire in 1934, Mary Tobin Callahan’s tea room, and numerous awards and events for and on the property.

Regarding the Ephraim Wales Bull Memorial

Maps of Concord, 1940s and undated

Source of Acquisition: Deborah Oney, from Sidney B. Whittier (a former owner of Grapevine Cottage)