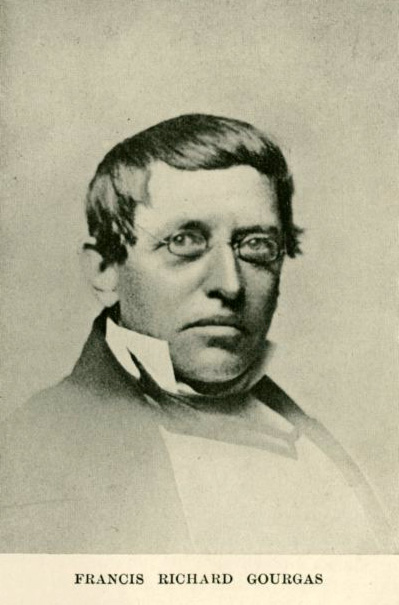 The collection consists mainly of the papers of:

The Gourgas family of Concord consisted of Francis R. Gourgas (1811-1853), his wife, Abigail Pierce Hastings Gourgas (1816-1896)—married in 1836—, and their children John Mark Gourgas III (1845-1919), Francis R. Gourgas Jr. (1843-1925), and Abigail Margaret Gourgas (1837-[unknown]). They resided in the house currently numbered 98 Monument Street (then numbered 20 Monument Street) early in the 1830s; they were the neighbors of prominent Concord families including the Keyes family and the Bartlett family. During their time in Concord, Francis R. Gourgas had the first indoor bathroom in Concord installed in the house.

Born in Dorchester, Massachusetts and raised in Weston, Massachusetts, Francis R. Gourgas (1811-1853) was the son of wealthy Weston, Massachusetts resident John Mark Gourgas I, and the grandson of Huguenot and Revolutionary War General Jean Lewis Gourgas. Francis R. Gourgas was educated at the Concord Academy before attending Amherst College (1828-1829) and Harvard (1830) without graduating. He gained prominence in Concord during his 1835-1842 tenure as the owner and editor of the conservative anti-Freemason newspaper, the Concord Freeman. John Mark Gourgas I, who was managing the family’s funds at the time, funded Francis R. Gourgas’s purchase of a controlling share of the newspaper.

In addition to being a voice of the Democratic party in Concord, Francis R. Gourgas also lead an active life of public service, serving in Concord in the following positions:

John Mark Gourgas IV (1916-2001) served in the Army during World War II and was an active Freemason. It appears that much of the genealogy work in the collection was done by him in the 1960s and 1970s. In 1972 he gained employment at Jericho Village in Weston and lived and worked in the town for the rest of his life. He married twice and fathered five children before his death in 2001.

SCOPE AND CONTENT: The collection holds mainly papers of the Gourgas family in Massachusetts. In addition to these papers, there are some materials related to the Bartlett family of Concord (Edward Jarvis Bartlett and his descendents), neighbors of the Gourgases on Monument Street.

Papers consist of account books, ambrotypes, daguerreotypes, photographs, letters, certificates, town reports, photocopies of research material, and research notes. The bulk of the collection consists of photographs and papers of individuals in the Gourgas family, most prominently those of John Mark Gourgas IV (1916-2001) of Weston, Massachusetts. Other family members’ papers include Francis R. Gourgas of Concord (1811-1853), Massachusetts, and his father, John Mark Gourgas I (1766-1846) of Weston, Massachusetts. There is also a sizable collection of records regarding the genealogy of the Gourgas family, likely gathered by John Mark Gourgas IV. The collection also includes Concord town reports owned and annotated by members of the Gourgas family in Concord.

NOTES/COMMENTS: Accessioned 2007 (AMC 160). During processing, town reports of Concord from the late 19th century and early and mid-20th centuries that were not relevant to the collection were removed. Further, unannotated copies of commemorative material related to Concord anniversaries was also removed from the collection. The silhouette portrait of Francis R. Gourgas, signed by artist Auguste Eduoart, 1842 January 21 was confirmed using Ancestors in Silhouette by Emily Jackson (New York: John Lane Company, 1921).