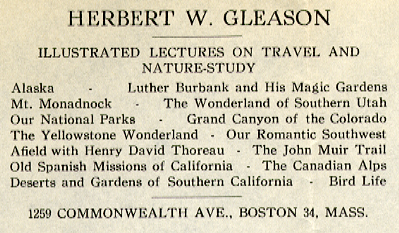 BIOGRAPHY:  Born in Malden, Massachusetts on June 5, 1855, Herbert Wendell Gleason graduated from Malden High School in 1873, Williams College in 1877, and received a BD degree from Andover Theological Seminary in 1881.  In 1883, he married Lulie Wadsworth Rounds and moved to Pelican Rapids, Minnesota to begin a career as a Congregational pastor.

In 1888, he left the ministry and worked as the managing editor of and contributor to the Northwestern Congregationalist (later The Kingdom), a denominational weekly newspaper. By this time, he was an avid outdoorsman and photographer, and wrote many articles for The Kingdom featuring outdoor scenes. In 1899, he actively committed himself to photography as a profession, and moved back to the Boston area.  By the time he returned to New England, he had become interested in the writings of Henry David Thoreau, and in Thoreau's Transcendental approach to nature as symbolic of something higher than concrete reality.  He visited Concord repeatedly between 1899 and his death in 1937 to take pictures of the landscape that Thoreau had known.   Houghton Mifflin used some of Gleason’s images to illustrate the 1906 Manuscript and Walden editions of Thoreau’s writings.  (Gleason himself researched the map of Thoreau’s Concord included in the 1906 editions.)  His photographs also appeared in Through the Year with Thoreau (Boston: Houghton Mifflin, 1917).  The result of Gleason’s sustained interest in Thoreau and in Concord was an exhaustive and meticulously identified visual archive of Thoreau’s world, now held primarily by the Concord Free Public Library.

In addition to his Concord work, between 1899 and 1937 Gleason photographed places all across this country and in as well.  He is remembered for his photographs of parklands and potential parklands for the National Park Service.  A friend of Stephen Mather, first Director of the National Park Service, and also of second director Horace Albright, Gleason was appointed to an official position and sent out on photographic expeditions to wilderness areas.  He is remembered, too, for his illustrations of John Muir’s work, for his photographs of Luther Burbank’s horticultural experiments, of formal New England gardens and of flower shows, and for his work as a photographer for the Arnold Arboretum.

SCOPE AND CONTENT:  Papers, [1905]-1937, including correspondence, notes, indexes, list, galley proofs, maps, and stationery.  Correspondence (1921-1937) includes letters to/from Allen French, E. Harlow Russell, William Wheeler, G. Waldo Brown, Charles Bullard, Percy W. Brown, R.J. Eaton, Raymond Emerson, and Fanning Hearon.  Undated notes, indexes, and list include typed sheets of quotations from Thoreau’s writings for use with slide lectures and manuscript, typed lecture- and publication-related subject indexes and notes on a variety of topics, and typed list of Gleason photographs illustrating the 1906 editions of Thoreau’s writings.  The corrected galley proofs are for the second volume (“The Last Journey of Thoreau”) of The First and Last Journeys of Thoreau (1905).  Maps include an undated reduced adaptation of the 1852 Walling map of Concord (mounted on card stock), two copies of the Gleason map from the 1906 editions of Thoreau’s writings, and an undated pencil copy of Thoreau’s survey “Plan of the ‘Ox Pasture (so called) Belonging to Thomas Wheeler” (original 1856).  Stationery includes two unused pieces of Gleason letterhead (“Herbert W. Gleason Illustrated Lectures on Travel and Nature-Study”).

SOURCES OF ACQUISITION: Undocumented; probably multiple.  Some of the papers may have come from Allen French or his heirs.

TL (copy), HWG to Allen French, 1922 Jan. 28, regarding preparation of albums of photographs for CFPL.

TLS, Allen French to HWG, Concord, 1922 Feb. 7, regarding the subject composition of albums of photographs for CFPL.

TLS, HWG to Allen French, Boston, 1922 Feb. 15, regarding whether or not photographs for CFPL albums should be toned; on embossed Herbert W. Gleason Illustrated Lectures letterhead.

TLS, Allen French to HWG, Concord, 1922 Apr. 11, regarding binding, indexing, and labeling of photograph albums for CFPL.  (Also, a carbon copy of this letter.)

TLS, HWG to Allen French, 1922 Apr. 12, regarding titling photograph albums for CFPL; on Herbert W. Gleason Illustrated Lectures on Travel and Nature-Study letterhead. (Also, a carbon copy of this letter.)

TL (copy), Allen French to HWG, 1922 May 2, regarding titling photograph albums for CFPL.

TLS (copy), Allen French to HWG, 1936 Oct. 29, regarding  purchase of another set of photograph albums by the CFPL and regarding Gleason’s offer of slide lecture “Thoreau’s Country” for sale to the CFPL.

Folder 2:
All other correspondents, 1901-1937 (arranged chronologically):
TLS, E. Harlow Russell to HWG, Worcester, 1901 Apr. 23, regarding enclosure of original of a letter from Thoreau to H.G.O. Blake, and thanking Gleason for photographs.

TL (copy), HWG to William Wheeler, Boston, 1921 Mar. 24, regarding preparation of albums of photographs for CFPL.

Folder 3:
Typed sheets of quotations from Thoreau’s writings, for use with slide lectures.

Folder 6:
Galley proofs (corrected) for Volume 2 (“The Last Journey of Thoreau”) of The First and Last Journeys of Thoreau, Lately Discovered Among His Unpublished Journals and Manuscripts.  Edited by Franklin Benjamin Sanborn (Boston: Printed exclusively for members of The Bibliophile Society, 1905), plus related notes by Gleason, manuscript (shorthand) and typed.

Two copies of the Gleason map (with note and index) from the 1906 editions of Thoreau’s writings.

Pencil copy of Thoreau’s survey “Plan of the ‘Ox Pasture’ (so-called) Belonging to Thomas Wheeler Concord, Mass. … May 5, [18]56” (no. 145a in the Concord Free Public Library’s Thoreau survey collection).