Photographs of the Works of Daniel Chester French, 1870-1925 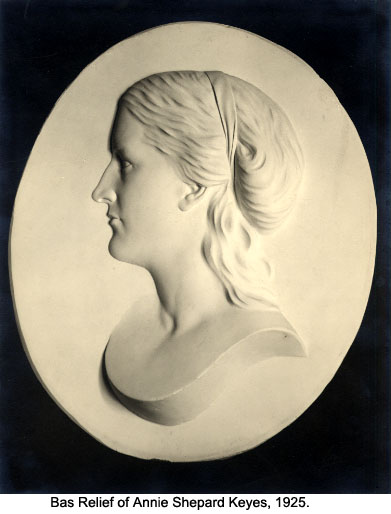 EXTENT:  Approximately 145 photographs housed in two volumes and one box.

BIOGRAPHY:  The sculptor Daniel Chester French was born April 20, 1850, in Exeter, New Hampshire. His father was Henry Flagg French, who served as the Assistant Secretary of the United States Treasury. French’s childhood was spent in Amherst and Cambridge, Massachusetts until 1867, when the family relocated to Concord. In that year, French attended the Massachusetts Institute of Technology, but withdrew after two semesters and failing several classes.

French received advice in sculpting from May Alcott and studied with painters William Rimmer and William Morris Hunt. His early works include depictions of friends who were willing to sit for portraits. One of these pieces is a bust of Ralph Waldo Emerson (1879). In 1914, French completed a full-length seated Emerson that is still on view at the Concord Free Public Library.

Although the sculptor's works can be found throughout the country, he is most famous for the Minute Man Statue located at the North Bridge (1875) and the Lincoln Memorial in Washington, D.C. (1922). French’s early home and studio were located on Sudbury Road in Concord. He died on October 7, 1931, in Stockbridge, Massachusetts, and is buried at Sleepy Hollow Cemetery in Concord, which is also the site of Mourning Victory (the Melvin Memorial), one of his better-known works.

SCOPE AND CONTENT:  The collection contains approximately 145 hand-captioned photographs (dated 1870-1925) of works by Daniel Chester French.  It includes pieces designed for public buildings and the World's Colombian Expedition (1893), as well as a large number of privately commissioned works.  In addition to the artist's own work, collaborations with architects (Bruce Price, Thomas Hastings) and other sculptors (E.C. Potter) are also depicted.  Most of the photographs are mounted and bound into two bound volumes; the remainder are mounted on loose sheets, unbound.

Series I: Photographs in Volumes

27. “The Butt-Millet Memorial Fountain.   Washington, D.C.   1914.” (Two photographs: Detail of figures featured on opposite sides of the fountain.)

42. “The Marseillaise. Erected in Strassbourg.
The Gift of the Citizens of St. Louis.”

55. “‘Love’~ (1924)   Corcoran Gallery. Suggested by a
Photograph of a Geyser in Yellowstone Park.
‘The sons of God saw the daughters of men, that they were fair.’”
(The photograph and caption are accompanied by a letter from French dated July 14, 1925, and a magazine clipping of an image of a Yellowstone Park Geyser that inspired the sculpture. The letter indicates DCF's gift of 20 photographs "under separate cover.")

Series II: Loose Photographs (boxed, formerly in envelopes)
(Note: Except where specified, Daniel Chester French has written his name and the address of his New York studio on the back of each mounted image.)

2. “Gallaudet and the Deaf Mute.
Group in bronze at Kendall Green, near Washington.
1889."

4. “Peace
One figure of colossal group on
the Custom House at St. Louis.”

5. “The Awakening of Endymion. (from the marble.) 1876.”(Reverse also has partial photograph of unidentified sculpture.)

9. “Daniel Chester French in New York” (Photograph of the sculptor working in his New York studio. No studio address on reverse.)

11. “Bas relief of Annie Shepard Keyes, now Mrs. Edward Waldo Emerson.
Photograph by Alfred E. Swift, October 18, 1925, at the House of
Prescott Keyes.
Incised on the back of the original:
‘D.C. French, Sculptor.
July 1870,
Concord,
Mass.’
Miss Keyes born May 4, 1847.
Mr. French born April 20, 1850.”
(Preceding text is handwritten on the reverse of the photograph. No studio address on reverse.)

14. “The Minute Man of Concord.
1875.” (Two photographs: views from front and left. Reverse also has partial photograph of unidentified sculpture, the same as no. 5 above, different section.)

16. Lewis Cass (Caption of photograph as read from the base of the sculpture. No studio address on reverse.)

17. “Labor. Department of Fine Arts.” (Caption of photograph handwritten on reverse along with the following:
“Miss Marion B. Keyes
with the compliments of
Dan Chester French,
Concord Mass,
Sept 10 1883.
(No studio address on reverse.)

18. Photograph of Ralph Waldo Emerson Statue. Signed by Daniel Chester French. Dated 1913. On the reverse is a page distributed by the Emerson Statue Committee, soliciting contributions for the erection of the statue. Includes two copies of the mounted image and an additional page of the committee advertisement. Handwritten on one copy: “Presented by George A. King 1915.” (No studio address on reverse of either copies.)