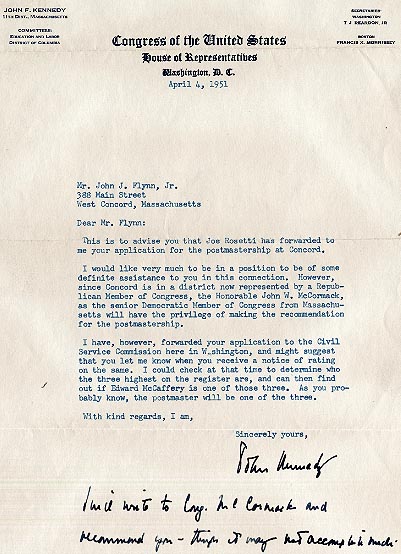 ORGANIZATION AND ARRANGEMENT: One series.

BIOGRAPHY: John Joseph Flynn, Jr. (1923-1984) was born in Newburyport, Massachusetts. He graduated from Georgetown University's School of Foreign Service in 1947, followed by graduate work at Georgetown University Law School. Mr. Flynn was employed by the U.S. State Department's Passport Agency from 1945 to 1950 at the Washington office, and from 1950 until his retirement in 1980 at the Boston office, where he was the agent in charge. During World War II he served in the State Department's Foreign Service in Iran; until that time the youngest staffer ever to be sent overseas. He was a member of the Federal Executive Board in Boston and in 1959 was awarded the U.S. State Department's Meritorious Service Award.

A resident of Concord from 1950, Mr. Flynn was involved in many aspects of town life, including Little League Baseball and the Boy Scouts. He and his wife Ann had eight children and, at the time of his death, five grandchildren.

SCOPE AND CONTENT: The collection is comprised of four letters from Congressman John F. Kennedy (D. Mass.) to John J. Flynn, Jr. of Concord, Massachusetts, written in April-May 1951 in support of Mr. Flynn’s application for the position of Postmaster of Concord; Mr. Flynn’s Application for Postmaster or Rural Carrier, undated [ca.] 1951; photograph of John J. Flynn, Jr. and a WEEI Radio personality, not before December 1960; and a letter from Senator Edward M. Kennedy (D. Mass.) on Mr. Flynn's retirement, 20 Nov. 1980.

SOURCE OF ACQUISITION: Acquired from Ann Flynn via Peter A. Flynn, October 2011-March 2012.

Folder 3:
Photograph of John J. Flynn, Jr. and a WEEI Radio personality, not before December 1960