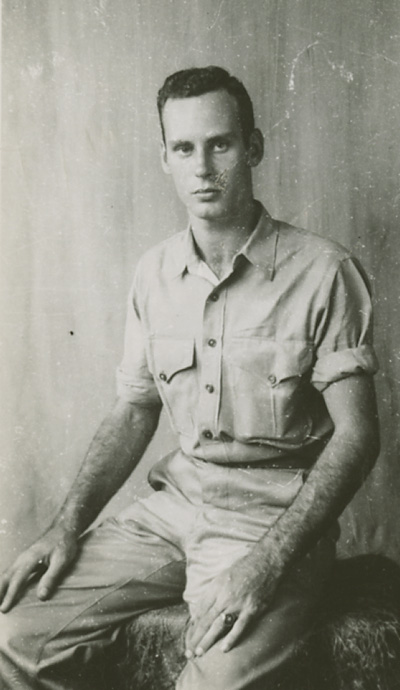 BIOGRAPHY: Robert Edward Field, son of Margaret Dee Bent and grandson of Joseph Dee, was born on April 6th, 1921. President of his 1939 graduating class at Concord High School, he delivered the salutatory address. When the superlatives were handed out he was voted the “most popular boy,” as well as earning recognition as an outstanding athlete. After graduation he completed a two year post-graduate program in business administration at The Peddie School in Hightstown, New Jersey, where he was the center on their championship hockey team and a varsity football letterman. He graduated from Peddie in June 1941.

In December of that year, as the United States prepared to enter the war, Bobby enlisted in the U.S. Marine Corps. On Christmas Eve he and Miss Jane Kerrigan of Stoneham became engaged, and a few weeks later he reported for basic training at Parris Island before being transferred to San Diego for additional training, becoming certified in radio communications. In July 1942 he shipped out to the Pacific, where he was stationed for the duration of his war service. Among the locations where he served were British Samoa, Kwajalein, Okinawa and Guam. He was killed in action by sniper fire on July 21st, 1944, the first day of the Second Battle of Guam. Corporal Field was posthumously awarded the Purple Heart.

Originally buried in the U.S. Army, Navy and Marine Corps Cemetery on Guam, Corporal Field was re-interred at the National Memorial Cemetery, Punchbowl Crater, Honolulu, Hawaii when it opened in 1949. His mother, Mrs. Margaret Bent, made a visit there for a Memorial Day ceremony in May of 1959.

SCOPE & CONTENT: The collection provides an overview of the life of young Concordian Robert E. Field, with an emphasis on his service in the United States Marine Corps during World War II and subsequent death on the first day of the second battle of Guam in 1944. It contains childhood memorabilia, including photographs, a class picture, and a certificate of confirmation; documents related to his Concord High School years and post-graduate education at The Peddie School include yearbooks, newspaper clippings, photographs, and diplomas. Materials related to Corporal Field’s service in the Marines include a certificate and a commendation, photographs, newspaper clippings and two diaries. Documents relating to his death include a telegram, official communications from the military and the U.S. government, obituaries and related materials. Documents related to his burial on Guam and re-interment in Hawaii include official communications from the military, information on National Memorial Cemeteries in general and the National Memorial Cemetery of the Pacific in particular. His awards and commendations include two medals, one ribbon and associated paperwork. Materials from Mrs. Bent’s trip to visit her son’s grave in 1959 include photographs of the cemetery and the grave marker and travel-related ephemera.

Correspondence: The majority of the letters in folders 12 and 13 were written by Robert E. Field  to his mother, Mrs. Margaret Bent; two are directed to Mr. John “Jack” Bent (his stepfather).  Folder 14 contains letters from Robert to Mr. Joseph Dee (“Pa”) (his grandfather) and the others to Joseph Dee and Lydia (his housekeeper). Folder 15 contains letters from Margaret Bent to Robert, indicating that she had not heard from him. Folder 16 contains letters written by Robert’s friend and fellow Concordian Joseph V. Mara to various people. There are four folders of letters, notes, cards and Mass cards sent to Margaret Bent following Robert’s death, as well as a folder of miscellaneous correspondence.

Artifacts include an American flag, two medals, a pin and a ribbon.

SOURCE OF ACQUISITION: Donated by Susan Dee on behalf of the Dee family, 25 February 2013.

NOTES: A 1939 Concord High School Yearbook that was donated with these papers has been added to the CFPL yearbook collection.

Box 1, Folder 4: Photographs, ca. 1942 and undated
Various photographs of Robert E. Field alone, with his grandfather, Joseph Dee, with his fiancé, Jane Kerrigan; unidentified photo of Robert Field with a group of men and boys.

Box 1, Folder 20: Letters, notes, cards and Mass cards sent to Margaret J. Bent on the death of Robert E. Field, undated; related materials: Certificate: Purgatorian Society under the direction of the Redemptionist Fathers, enrolling Robert E. Field as a member, given by the Church of Our Lady of Perpetual Help, Roxbury, Mass., 29 August 1944; Mass card enrolling Robert E. Field in the Seraphic Mass Association by the Supreme Council of the Knights of Columbus, 29 December 1944.