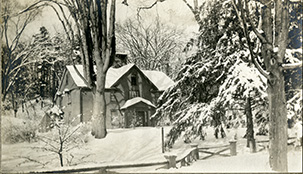 Organization: Organized in one series with albums in chronological order based on the date of creation provided by Edwards Roberts.

Biography: Edwards Roberts (1854-1926) was born in Andover, Massachusetts. He is reported to have come to Concord, Massachusetts, from New York City in 1919 at age 63 for his health. His obituary in The Boston Globe (July 7, 1926) states that he was a retired broker who lived at the Colonial Inn on Monument Square for the last seven years of his life before succumbing to “shock following illness of several weeks.” While living in Concord, he took many photographs of local homes and sites of interest which he mounted into hand-bound albums with hand-written captions, perhaps for friends. In 1921, three of his albums were displayed at the Concord Free Public Library.

Scope/Content:  An artificial collection consisting of eighteen hand-made albums of photographs taken by Edward Roberts in 1919 or 1920 of well-known scenes around the town of Concord. Album 2 contains the handwritten inscription, “These photographs of Concord scenes make no claim to professional excellence. They were taken with a Brownie 2A Kodak Camera by an amateur for his individual pleasure. Edwards Roberts/ Concord August 1920.” The bulk of the photographs used are named and dated by Roberts in the first two volumes, which have a different type of binding from the others, and tie-closures. The rest of the volumes contain mostly the same prints used repeatedly, although with more extensive handwritten (and also repeatedly used) captions.

Number stickers applied to the front covers of some of the albums no longer apply. The albums are varied in terms of condition. Some (3 and 4) are particularly fragile and some (6, 7, 9) are missing their front covers.

Box 1, Album 1:
[No title] (1920) – one photo print per numbered page (beginning page 2) with photo title and date underneath, handwritten by Roberts. Photo titles below are transcribed.

Box 1, Album 2:
[No Title] (1920) – inscribed [ER Monogram] “These photographs of Concord scenes make no claim to professional excellence. They were taken with a Brownie 2A Kodak Camera by an amateur for his individual pleasure. Edwards Roberts/ Concord August 1920.” All photo titles below provided by Roberts and literally transcribed.

Box 1, Album 7:
[No title] (1921) – inscribed “Edwards Roberts Concord, 1921;” contains the following handwritten note on a loose scrap of paper, dated 9/8/88: “This book came to Mrs. Russell of Harvard via her father, Clement Ford who boarded at ‘Mrs. Bullock’s’ (the David Emerson house on Estabrook Rd.). He was a good friend of Raymond Emerson’s & as a boy went out with A. Hosmer, the photographer, on his walks around Concord. Clement Ford did not do this book, & Mrs. Russell has no idea who ‘Edwards Roberts’ was.”

Back to Special Collections Homepage