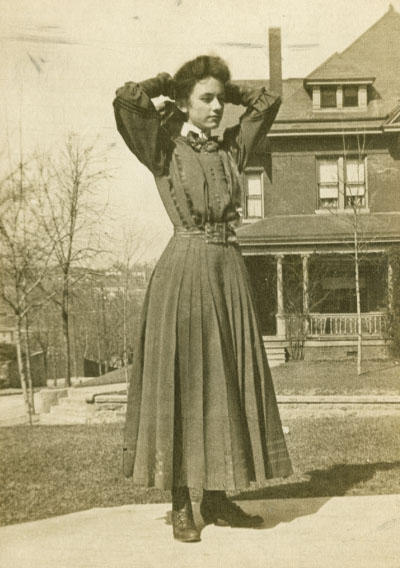 Biographical Note: Katherine K. Davis was a prolific composer and music teacher. Born Katherine Kennicott Davis in St. Joseph, Missouri on June 25, 1892, she graduated from Wellesley College in 1914, where she received the Billings Prize for Musical Composition. Wellesley College was one of several institutions where she later taught music, including the Shady Hill Country Day School in Philadelphia and Concord Academy in Concord, Massachusetts. She was also a founder of the Concord Chorus. Davis studied at the New England Conservatory of Music, in France with Nadia Boulanger, and at Thomas Whitney Surette’s Summer School for music teachers. In 1941 she published “Carol of the Drum,” later known as “The Little Drummer Boy.” Other works included numerous original sacred and secular compositions, arrangements, and musical dramas such as The Road to Galilee. She lived for many years on Bow Street in Concord before moving to a nursing home in Littleton, Massachusetts towards the end of her life. Davis died on April 20, 1980 and was buried in Concord’s Sleepy Hollow Cemetery.

Scope and Content: The Katherine K. Davis Papers contain materials focusing on Davis’s life and work, and include personal writings, mementos, and correspondence, as well as many catalogs of her musical compositions and other music-related materials. The collection contains personal records, including her 1909 prize-winning high school essay “The Literature of the Revolution,” the 1914 commencement program from Wellesley College, a handwritten autobiographical sketch, and her short biography “Thomas Whitney Surette: A Biographical View.” There are many black and white and color photographs, identified and unidentified, including several of Davis. Collection also includes contents of Davis’s black spiral notebook, which contains a handwritten copy of “The Infinite Variety of Music” by Leonard Bernstein and annotated sheet music. Other materials include genealogical research, passport, materials about Concord life, obituaries, and tributes. Collection contains numerous catalogs of sheet music by Davis, including multiple versions of “Carol of the Drum,” lists of songs and publications, and publicity and performance materials related to her musical works. There are also lists and catalogs of works by other composers.

Source of Acquisition: Most of the collection presented by Winifred B. Bush.

Wellesley College 1914 Class Record Report for 1979, February 1980. Update from Davis about living at Littleton House (pages 5-6) and note of change of address (page 32).

Identified black and white and color photographs of Davis with friends, 1954–1977.

Unidentified black and white and color photographs of Davis with others, including Nancy Loring; at home and at piano; with group of schoolchildren; outside a house. Includes photographs pasted to album pages.

Folder 3. Genealogical and biographical information, [undated]–1981 (bulk 1976–1981) (arranged chronologically):
Folder of genealogical research by Elizabeth Maxfield-Miller, February 1976. Contains folder for mother’s side and folder for father’s side. Note on front: “Genealogical notes for Katherine Kennicott Davis of Concord, Massachusetts as a present from her friend Elizabeth Maxfield-Miller, Ph.D., Genealogist, February 1976”.

The Green Hill Junior Choir and Duet Book, compiled and arranged by Katherine K. Davis, with handwritten notes, ©1938. Contains:
“All glory, laud, and honor”
“Almighty God, Who hast me brought”
“Angels o’er the fields were flying”
“Awake, thou wintry earth”
“Bow down Thine ear, O Lord”
“Break forth, O beauteous heav’nly light”
“Christ, when a child, a garden made”
“Comfort, O Lord, the soul of Thy servant”
“Glory and worship are before Him”
“Glory to God”
“God is a Spirit”
“God our Father, Lord of Heaven”
“Hear Thou my prayer, O Lord”
“Hide not Thou Thy face from us”
“I would we lived as angels do”
“If with all your hearts”
“In Thee, O Lord, have I trusted”
“Jesu, Holy Spirit”
“Lo, a voice to heaven sounding”
“Lullay, Thou little tiny Child”
“Now all the woods are sleeping”
“O Father, all creating”
“O God, Thy goodness reacheth far”
“O Jesu, so sweet”
“O Lord, most merciful”
“Praise to the Lord, the Almighty”
“Praise we our God”
“Sing we Noel”
“Take my life, and let it be”
“Teach me, O Lord”
“To God on high be thanks and praise”
“Triumph! Thanksgiving”
“We gather together (Prayer of Thanksgiving)”
“When to the temple Mary went”
“Ye watchers and ye holy ones”

Folder 7. Cantatas and musical dramas by Katherine K. Davis, 1953–1973 (arranged alphabetically by title):
The Children of Bethlehem: A Christmas Cantata for Children’s Voices, ©1973
The Road to Galilee: An Easter Musical Drama, ©1964
This is Noel: A Carol Cantata, Mixed Voices, ©1953
The Unmusical Impresario: A Musical Comedy in One Act, ©1956

Handwritten notes and lyrics, some written on calendar pages from June and July 1970; handwritten pages of sheet music.

Under the Greenwood Tree: A Play of Robin Hood at Shady Hill Country Day School, May 1929. Includes handwritten notes.

The Road to Galilee presented by the Chancel Choir at First Church of Christ, Congregational in Bedford, Massachusetts, March 19, 1972.

Copy of Nancy Loring with Felix Wolfes on piano at Jordan Hall, April 11, 1947. Original in Folder 2.

The Bulletin, National Association of Teachers of Singing, Inc., September 1954.

Folder 13. Music composed by others, 1976–1981 (arranged alphabetically by composer):
Sheet music catalogs by other composers. Includes list of catalogs at beginning of folder.