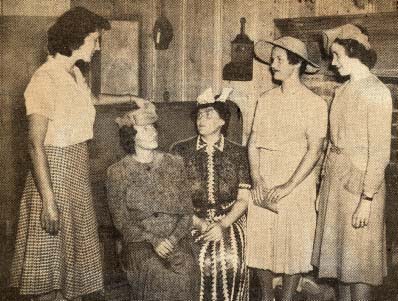 HISTORY: The Garden Club of Concord, Massachusetts was founded in 1928. The Club has stated as its purpose the creation of interest in and aid in the preservation, restoration, and development of the environment and gardens of Concord. Composed entirely of women, it has a maximum membership of 80. The main offices consist of President, Vice President, Recording Secretary, Corresponding Secretary, and Treasurer. There is also an Executive Board, Program Committee, and Conservation Committee, with more committees appointed as need arises. Members are expected to attend at least three meetings and participate in at least one community service project, administrative duty, or fundraising duty annually. Candidates for membership must be presented to the Executive Board and approved by three active members. The Club has annual membership dues and has participated in fundraising through plant sales and town garden tours. The Club has a solid record of community service projects, including providing flowers to Emerson Hospital and the “Mill Brook Beautification” project. The Club did not meet during the years of World War II, 1943-1945, but began meeting again in1946. It remains active today.

SCOPE AND CONTENT: Records, 1928-1971, include: four volumes of meeting minutes (one bound, three unbound) in the hand of several secretaries, 1929-1934, 1936-1941—including Constitution and By-Laws, 1941-1942, 1945-1950, and 1950-1959—(all volumes including newspaper clippings both loose and pasted in); pamphlets containing membership lists, officers, Executive Board members, and Club programs from 1928-1942, 1949-1971; miscellaneous reports, including: meeting minutes, treasurers’ notes, presidents’ reports, report of Flower Committee, report of activities for 1970-1971, announcement concerning Earth Day, plant sale report, report on groundcover and soils, and three letters, 1945- 1971, plus undated materials; newspaper clippings mostly concerning the conservation of Heywood Meadow in Concord, with a few clippings about Garden Club events, 1959-1969; ephemera consisting of two copies of a poster mock-up (“Keep America Clean”), “Lexington Leaflet of Botanic Gardens,” an invitation to an auction, a flower show entry form, and two pamphlets about a tour of the spring gardens of Concord, 1944-1971, plus undated materials.