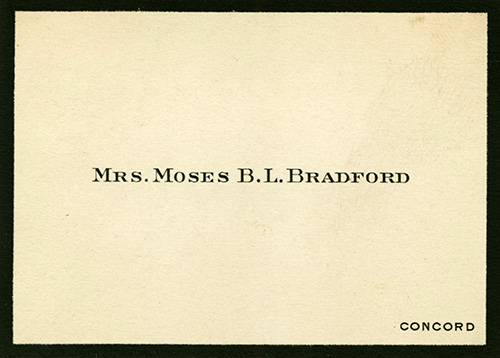 EXTENT: 80 items in one folder.

ORGANIZATION AND ARRANGEMENT: Organized in a single file; arranged alphabetically by name of caller.

BIOGRAPHY: Son of Charles A. and Edith Page Browne, Augustus Page Browne was born April 16, 1892 in Newton, Massachusetts.  He was educated at Governor Dummer Academy and Dartmouth College (Class of 1916) and served as a Field Artillery captain in World War I.  After marriage, Mr. Browne lived in Concord, Massachusetts.  He worked in real estate management and cofounded the Sheraton Corporation of America, from which he retired in 1957.  (Robert L. Moore, also of Concord, was another Sheraton cofounder.)  Mr. Browne was a supporter of philanthropic and historical endeavors in the Boston area.  He died February 8, 1970.

In 1929, Page Browne married Grace Fagan of Pittsburgh, Pennsylvania.  Mrs. Browne (1897-1982) was the daughter of Charles A. and Mary Kane Fagan.  The Brownes honeymooned in Europe, traveled back to America via steamer, and made their first home on Ripley Hill Road in Concord, later moving to 177 Barnes Hill Road.  Their sons Augustus Page Browne, Jr., and Pierce B. Browne were born in 1932 and 1935, respectively.

This collection of visiting (or calling) cards reflects a common social practice of the upper middle and upper classes in earlier times.  Visitors would pay a formal call and leave a card, regardless of whether or not the person called upon was home.  As newlyweds and recent arrivals in Concord, the Brownes received a number of local visitors bearing engraved visiting cards and welcome wishes.

SCOPE AND CONTENT:  80 engraved visiting cards presented at the A. Page Browne home in Concord, Massachusetts, soon after the Brownes moved to town in 1929.  The collection includes a total of seventy-six unique cards and duplicates of four of them.  Most of the cards bear Concord names, but some represent visitors from elsewhere.  Mrs. Browne saved them and stored them in her husband’s desk, which was inherited by her son Pierce at her death in 1982.  See container list below for a listing of the names represented in the collection.

All visiting cards filed in a single folder, as follows: