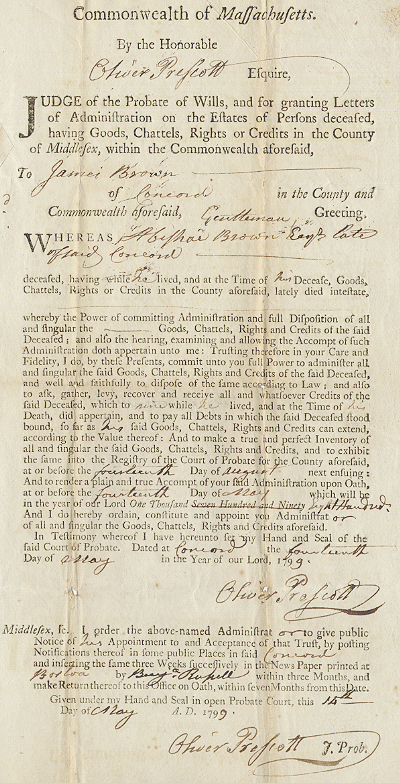 Series II. Newspapers and newspaper clippings (1758, 1912-1923) related to the Brown, Keyes, Hudson, and Walcott families as well as a facsimile (?) of The Newbury Chronicle, a paper published by James Franklin.  The newspaper clippings relating to Caroline Lamson Brown cover the sinking of the Titanic in 1912 as well as an article on the sinking of the Lusitania in 1915.  In the series, there are two articles related to George S. Keyes. One contains information on the Concord Minutemen of 1916. The other is a set of pictures published in the New York Times bearing George S. Keyes, Keye’s.  Roger Walcott inscribed the New York Times publication entitled, “Why England, Germany and Russia Went to War.”  There is an article from the Boston Herald and Journal about Marion Hudson’s time as a mechanic during World War I.

Deed, Mary Brown to Abishai Brown, for the estate of her deceased husband, 1766 Dec. 26.

Deed, Mary Brown to Abishai Brown, for the land holdings as part of the estate of her deceased husband, 1778 May 4.

Court order to Abishai Brown (Jr.) to distribute parts of the estate to his siblings of their late father. 1779 Feb. 11.

Court order to Abishai Brown (Jr.) to pay his siblings their shares of the estate of his deceased father, 1779 March 2.

Letter of Administration ordering James Brown to act as administrator for his father Abishai Brown’s estate, 14 May 1799.

Letter, Abishai Brown’s children to whom it may concern, authorizing James Brown to sell fifty acres of their late father’s land to pay off deeds and other debts, 1801 May 2.

Letter appointing Ephraim Wood, Abiel Heywood, and John Proctor to appraise the estate of the late Abishai Brown set off to his widow Jerusha upon his death, 1811 Oct. 3.  Inventory of the estate is attached, 1811 Nov. 18.

Copy of the inventory of the late Abishai Brown’s estate set off to his wife Jerusha, 1811 Nov. 18.

Description of the deeds related to the estate of Andrew Hildreth of Concord beginning 1826 Sept.

Survey sketch of the land of Peter Jones, which adjoins the land that Abishai Brown purchased from Samuel Burr, 1827 April 14.

Note, from Andrew Hildreth acknowledging his debt of $490 to Nancy Hildreth, 1827 July 26.

Deed, from Joseph Smith to Joseph Dudley for fifty acres of land in Concord witnessed by Abishai Brown, 1828 March 4.

Court order commanding Andrew Hildreth to prison until he can settle his debt to Nancy Hildreth, 1831 Feb. 7.  Also letters explaining the auction of Andrew Hildreth’s mortgaged estate, some of which was purchased by Abishai Brown, 1831 Feb. 25-26.

Deed, Abel Moore to Abishai Brown for the mortgaged estate of Andrew Hildreth for $800, 1831 March 28.

Receipt, Silus Holden for $2.24 dollars he received from Abishai Brown for attendance and travel at court, 1832 April 19.

Receipt, David Brown for $6.20 from Abishai Brown for attendance and travel at court, 1832 April 19.

Receipt, Job Brooks for $1 from Abishai Brown for claims on mortgaged property of Andrew Hildreth, 1832 April 19.

Receipt, Benjamin Hildreth as guardian to Nancy Hildreth for ten dollars from George Hildreth and Abishai Brown, for expenses in the case of Brooks V. Hildreth and Brown 1833 Aug. 20.

The Boston Herald, 1912 April 20
14 pages on the Titanic
Including short article on Caroline Lamson Brown

Boston American, 1915 May 8
Sinking of the Lusitania

New York Herald, 1916 May 28
Article about the Concord Men of 1916 including George S. Keyes and John M.
Keyes

The New York Times Book Review and Magazine,1923 April 19
“Sorolla in Chicago and Spain,” possibly related to the interests of Alicia M. Keyes.

“An act for establishing the northern boundary line of the country purchased of the Chickasaw by the treaty of eighteen hundred and thirty two,” Twenty Third United States Congress, 1833 Dec. 2.

“Resolution presenting the thanks of Congress to George Washington LaFayette, the son, and to the surviving family of General LaFayette,” Twenty Fifth United States Congress, 1838 Dec. 3.