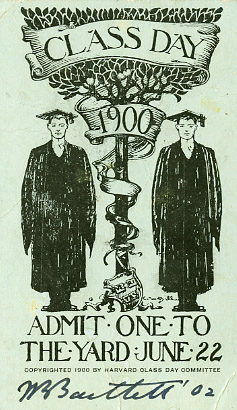 ORGANIZATION AND ARRANGEMENT:  as mounted by compiler. A number of items appear to have been removed from their places at some point and now are located, loose, at the front of the scrapbook.

BIOGRAPHY: William Bradford Bartlett (1880-1960) was the son of Edward Jarvis Bartlett, youngest child of Dr. Josiah Bartlett of Concord, MA. He attended Harvard University as an undergraduate from 1898 to 1902. During his tenure he joined the Banjo Club, became a member of Kappa Gamma Chi, and was an avid spectator at Harvard University’s baseball and football games, frequently buying season tickets for both. Because his father was Second Lieutenant in Company E, Fifth Massachusetts Cavalry, William was a hereditary member of the Military Order of the Loyal Legion of the United States. WBB attended Loyal Legion events while in school. After completing his undergraduate degree, cum laude, William went on to Harvard Medical School, completing his MD in 1906. He was a first lieutenant in the Army Medical Corps during World War I and went on to spend the bulk of his career working for the John Hancock Life Insurance Company in Boston.

Receipts (1898-1902)
For tuition, room and board, and lab fees.
For memberships in the Kappa Gamma Chi society and the Harvard Natural History society.
For subscriptions to the Harvard Crimson and the Harvard Monthly.

Eight cyanotypes of WBB’s trip to the mountains in New Hampshire (n.d.).

A letter (1900)
From Walter R. Spofford informing WBB of his election to the Kappa Gamma Chi society.

Invitations (1900-1901)
To events for the Military Order of the Loyal Legion of the United States.
To the Idler Club at Fay House, Radcliff College.