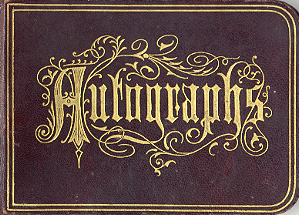 CONTEXT:  The keeping of autograph books was a popular practice in the nineteenth century.  They were used to collect signatures, and often sketches and verse as well.  Signers usually included the date of their signature.  Owners sometimes used autograph books to record personal details about the people who signed them: for example, in Item 2 in this collection, Mary Wheeler often recorded the date a person died on the page he or she signed.

SCOPE AND CONTENT:  An artificial collection consisting of autograph books kept primarily by Concord, Mass. residents, and including four photographs.  The books contain the signatures of many prominent Concordians, and document the members of the social circles to which the owners of the books belonged.

Item 2. 1873-1880:  Autograph book of Mary Wheeler.  Inscription: “To Sister Mary / By Her Brother Harvey / Christmas Eve, 1873.”  Contains many signatures from members of her family, as well as classmates and teachers at Concord High School.  Also contains sketches signed by N. Bent, including one of the North Bridge, with portraits of Emerson and a colonial figure.  Stored separately in an envelope are three photographs originally stored loose in the album.  Two show Mary Wheeler in her later years; the other shows a house, labeled on the back: “Brigham Homestead, Concord.”  This item is fragile, and requires careful handling.

Item 4. 1875-1884:  Owner unknown.  Contains possible mark of ownership in pencil on front pastedown endpaper: “Boars Head Mrs. Mitchell.”  Most of the signatures in this volume are from residents of Manchester, New Hampshire, but it was also signed by Concord residents Netta M. Buttrick; Eliza Conant; Emily Conant; Ellen T. Emerson; Carrie P. Holden; Sarah W. Holden; and others.  Contains a sketch of a small child observing herself in a mirror, signed by A.W. Davis.  Also includes signatures of people from Shanghai, , and others from St. Paul, Minnesota; Parkersburg, West Virginia; Fort Atkinson, Wisconsin; and Chicago.

Item 5. 1876:  Owner believed to have been an aunt of the book’s donor, Charlotte Johnson.  Concord signatures include Carrie P. Holden, Henry E. Holden, Eirene Wheeler, Mary Wheeler, and others.

Item 6. 1884-1904:  Autograph book of Lucie H. Wheeler.  Signatures of Concord residents and members of her family, including her children: Frances, Esther, Priscilla, and Hilda, and sisters Eirene and Mary.  An inscription beneath Fred D. Wheeler’s signature notes his death in Pueblo, Colorado, on October 20, 1887.  Includes colored sketch by B.H. Giles, dated April 16, 1884.