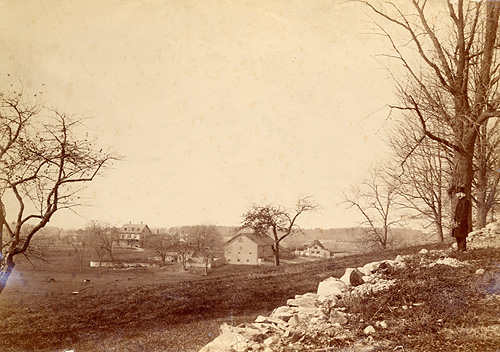 BIOGRAPHY: William Willder Wheildon was a printer, publisher, editor, journalist, lecturer, and a writer on historical and literary topics. He was born in Boston, Massachusetts in 1805 and died in Concord , Massachusetts in 1892. He founded the Bunker Hill Aurora in Charlestown in 1827 and continued to publish it until 1870. He purchased a home in Concord in 1846, and maintained a winter residence at Charlestown until 1856, when he made Concord his permanent home. He was a Freemason, member of Concord 's Corinthian Lodge, and Corresponding Grand Secretary of the Grand Lodge of Massachusetts. He was also a member of the Bunker Hill Monument Association, Massachusetts Charitable Mechanic Association, the New England Historic Genealogical Society, American Historical Association, Concord Antiquarian Society, Social Circle in Concord, American Association for the Advancement of Science, and the Massachusetts Horticultural Society. Wheildon was treasurer of the Peterborough and Shirley Railroad and president of the Boston and Chelsea Railroad. He was the author of numerous historical pieces, particularly on aspects of the American Revolution. He was an advocate of free bridges during the 1820s and 1830s. He contributed to the sections on the Concord Grape, Masonic societies, and Walden Pond in George B. Bartlett's Concord Guide Book .

SCOPE AND CONTENT: Papers, 1838-1889, consist of manuscripts ([1875]-1889), scrapbooks (1838-1889), and printed pamphlets (1849-1876). Manuscripts include [1875] “New History of the Battle of Bunker Hill” (printed in the Boston Daily Herald , also separately by Lee and Shepard of Boston) and piece relating to Battle of Concord and North Bridge. Scrapbooks include: Wheildon's “Editorial Correspondence,” clipped from Bunker Hill Aurora and other papers; his Boston Sunday Herald column “Curiosities of the Market,” dealing with availability, condition, and price of produce, meat, and other food items; “Miscellaneous Papers: Editorials in the Boston Herald ”; “Historical Sketches” from various newspapers; and topical scrapbooks of clippings (pieces by Wheildon and others) on a variety of subjects—“Social Life in Concord,” “Massachusetts Railroads,” “Concord Fight,” “The Great West,” “Rise and Progress of the Revolution, and Battle of Bunker Hill,” “The Revolutionary War in Massachusetts,” “Popular Mention of the Christmas [and other] Holidays . . . ,” “Defence of Mrs. General Gage from the Charge of Having Divulged the Secrets of her Husband . . . ,” [Concord School of Philosophy], “Massachusetts Centennial,” “Settlement of Concord . . . Ipswich . . . Hingham,” “The ‘Blue Laws' of Connecticut and Massachusetts, 1630-1640,” “The Boston Massacre (1770); the Massacre Monument (1888),” and “Home Life a Century Ago.” Printed pamphlets reflect the range of Wheildon's writings and activities.

RESTRICTIONS ON USE: Photocopy from scrapbooks is not permitted.

AVAILABILITY ON MICROFILM: Scrapbook “Social Life in Concord ” is available on microfilm for use in Library.

Box 2 contains oversize items (no. 2 and no. 5) from Series II: Scrapbooks