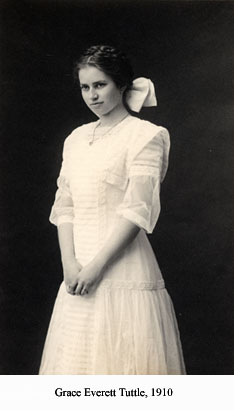 George Everett moved his family to Concord in the early 1850s.  He purchased a farm on the present day Sandy Pond Road from Edmund Hosmer in 1852.  He also bought properties and sizeable acreage on Walden Street in Concord in 1878.  After George’s death in 1885, the Everetts began selling the land in his estate to individuals and to the Town of Concord.  In 1886, the Town of Concord created Everett Street, connecting Walden and Thoreau Streets.  In 1887, Mary Everett sold what is now 110 Walden Street (the Timothy Wheeler House) to the Town of Concord for the Home for the Aged.  At that time, Mary moved into the present 128 Walden Street to live with her daughters Florence and Mary Louise, a teacher at the West Concord School.

Florence Evelyn Everett married Samuel Hanscom Tuttle (December 1, 1864 – March 19, 1939), a clerk, teacher, postmaster, and captain in command of the Militia Company, on June 11, 1890. (On this same day, Grace Otis Everett married Charles Derby, a farmer.) Samuel and Florence lived at the present 128 Walden Street and had a daughter Grace Everett (September 25, 1893-January 28, 1973). Grace graduated from Concord High School in 1910, Mt. Holyoke College in 1914, and the Massachusetts General Hospital Training School for Nurses in 1918.

The collection includes: ledgers (1846-1886) pertaining to Everett family finances, expenses, farm income, farm expenses, and livestock records, a day book, and a manuscript book of recipes; also includes items from George Everett’s schooling (1834-1841); land records and deeds for the Everett-Tuttle properties in Boston and Concord (1828-1925); correspondence (1836 – 1910); and Tuttle family papers (1890-1910).  There is a collection of 160 photographs of the Tuttle family, mainly of Grace Everett Tuttle and locations in and around Concord [ca. 1880- ca.1965].

SOURCE OF ACQUISITION: Acquired in two accessions, one (manuscripts) presumably from Grace Tuttle, the other (photographs) from her estate.

NOTES/COMMENTS: The daybook is in very fragile (deteriorating) condition; the binding is loose and the front cover is not present.

This series contains records pertaining to George Everett’s schooling, his professional life, and his personal affairs: a list of George Everett’s schoolmates (1834-1841); a reward of merit (1835); a letter from Paris, France regarding plants (1877); checks drawn on Maverick National Bank (1880); a judge’s ticket for Middlesex Agricultural Society exhibition (1885); estate inventory (1885); and notes on his farm, personal finances, and household purchases.

A) Deeds: Deeds for property purchased and sold by George Everett in 1850, 1852, and 1853.  Deeds present are for residences in Boston (Carver Street) and for farm and land in Concord. Purchases and sales took place between George Everett and Augustus Tuttle, Edmund Hosmer, and Silas M. Holden.

B) Other property records: This series contains petition letters, property descriptions, and receipts, generated by or relating to the Everett family.

This series contains a benefit certificate from the Royal Arcanum; a picture postcard from Manomet, Mass.; and an undated newspaper clipping about Samuel Tuttle’s appointment as postmaster of Concord.

Folder 19
Sketches of places in the Concord area