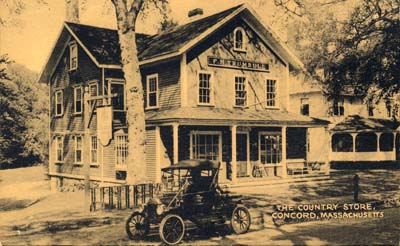 HISTORY: Retail store in Concord, Mass., specializing primarily in casual clothing, particularly in women’s sportswear and coordinates.  Merchandise also included penny candy, jams, and gifts.  Opened on Monument Street in 1941 by F.H. Trumbull, who had begun business in retail clothing in 1938.  The store’s Monument Street building was erected in 1780 on Main Street by Elnathan Jones, later moved to what eventually became the location of the Town House (where it was used as a store by Thoreau’s father John, among others), and moved again to its present site.  Branches of the Country Store were opened in various locations, including Edgartown (1941), Nantucket (1949), and Sarasota, Florida (1951).  Store conducted extensive mail order business, its first catalog prepared for the 1942-1943 Christmas season.  In 1946, the store was incorporated and Trumbull’s daughter Mary P. Locke and her husband William became involved.  The Lockes eventually took over the business.  In 1982, the store was acquired by C.M.L. of Acton, (owner of a number of retail stores) and in 1987 was converted to an outlet of the Nature Company.

SOURCE OF ACQUISITION: Most of the gift by Joan Trumbull, circa 1992. Later items presented by Helen Locke Cook.

Box 1, Folder 4:
Originals, for staff use only