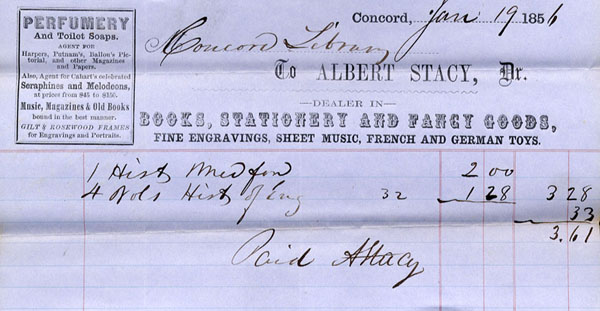 HISTORY:  At a meeting held by the Concord Social Library Oct. 11, 1851, it was voted “To give the Library to the town on condition they shall establish a public library on the plan contemplated by the Act passed May 24, 1851, entitled ‘An Act to authorize cities and towns to establish and maintain public libraries’.”  At a town meeting on Nov. 10, 1851, the citizens of Concord voted to accept the Concord Town Library.

The Concord Town Library was never had in a building of its own.  It was housed (alternately) in the Court House on Monument Square and in the Town House.

SOURCE OF ACQUISITION:  Records probably transferred when the Concord Town Library was absorbed into the Concord Free Public Library, 1873.