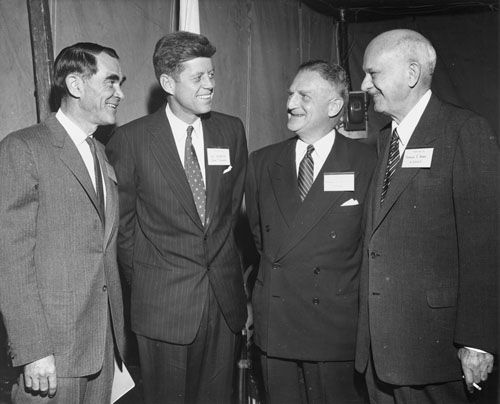 ORGANIZATION: Organized in a single sequence.

BIOGRAPHY:  Harold Colby Smith was born in Clifton, Illinois in 1903 and died in Key Biscayne, Florida in 1989. He was married to Maude Adams Smith. He served in the Quarter-master Corps, Army from 1918 to 1919 and graduated from the University of Illinois in 1927. Mr. Smith was President and Chairman of the Board of Colonial Press, Inc. of Clinton, Mass. from 1931 until his retirement in 1972. A Concord resident from 1936 to 1971, he served on the Board of Selectmen (1957-1960) and on the Finance Committee. He was a member of the Social Circle of Concord, the Concord Players, and the Concord Country Club. He was the Chairman of the Board of Selectmen when he spoke at the dedication of Nuclear Metals, Inc. in October 1958.

HISTORY: Nuclear Metals, Inc. opened in Concord in 1958. The company began as the Metallurgical Project of the Massachusetts Institute of Technology (M.I.T.) in 1942 and as Nuclear Metals, Inc. was acquired by Arthur D. Little in 1954. Dr. Albert Kaufmann, the founder of the company, was an Assistant Professor of Metallurgy at M.I.T. and was one of the first scientists to join the M.I.T. Metallurgical Project when it became established in 1942 at the direction of the Manhattan District Project. He became the Technical Director of the Project in 1946.  (The term “metallurgical project” was used to conceal the nature of the work on the atomic bomb.) By 1956 it became clear that Nuclear Metals, Inc. had outgrown its Cambridge facility and in 1958 the company moved to Concord. At that time Concord’s industrial base was growing and the town welcomed this and other business enterprises. (See Garrelick, Renee.  M.I.T. Beginnings: The Legacy of Nuclear Metals, Inc., 1995.  C.PAM 273 Item 2.)

SCOPE AND CONTENT: The papers contain letters to Harold C. Smith  (1958), including a letter from Theodore Smith, Executive Director, United States Committee for the United Nations; materials related to the 1958 dedication of Nuclear Metals, Inc. in Concord, including photographs; press releases associated with the 1958 dedication of Nuclear Metals, Inc; and ephemera belonging to Harold C. Smith.