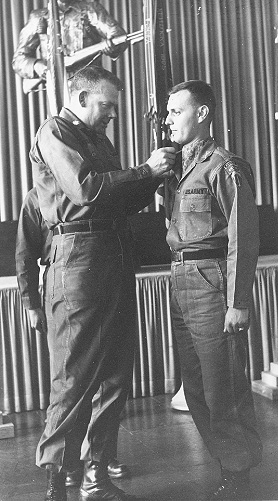 PROCESSED BY: LPW; biographical sketch and identification of materials within collection based on information provided by D. Michael Ryan, January 2, 1999; finding aid prepared 010/8/99.  Prepared for the Internet by Peter K. Steinberg, 05/22/06.

Box 1, Folder 6:
Beast Barracks for the Class of 1966 (printed “pictorial account of those … two months of training known as Beast Barracks”)

In the Heart of in the Twentieth Century: The Zonal Border.  Bonn and Berlin: Published by the Federal Ministry for All-German Affairs, 1965

Photocopy of TLS, Walter Steinweg to Gen. Goodwin, 24 Dec. 1968, regarding freedom of village of Steinstücken

Why? Have you Ever Wondered … [anti-wall printed handbill/notice; undated]

Box 2, Folder 13:
DMR photographs, in uniform (including photographs of promotion and award of medal)