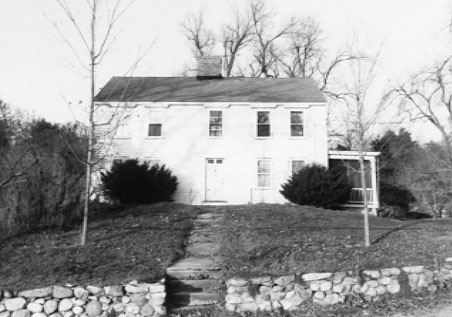 FAMILY BIOGRAPHY AND HOUSE HISTORY:  The Wheeler-Merriam House is located at 477 Virginia Road, which lies in the eastern section of Concord, Massachusetts.  The house is on a 35-acre lot on the southwest side of Pine Hill.  It was built in 1692 by Sergeant Thomas Wheeler, a settler of Concord.  Originally from Bedfordshire, England, he came to Concord in 1636.  Thomas married Sarah Merriam in 1648.  The house was built for his son Timothy and Timothy’s wife Lydia Wheeler as a wedding present.  Not long after its construction the house was assessed at 18 pounds—a significant property value at the time.  Through the years, the house was passed down through the Wheeler family—first to Timothy, Jr. (b. 1696; d.1782), then nephew Abner Wheeler (b.1745; d.1820; an architect) and, finally, Abner’s daughter and son-in-law Lucy and Joseph Merriam.  After 1865, the house left the possession of the Wheeler-Merriam family.  The Algeos became the owners and operated the property as a dairy farm and orchard name Pine Hill Farm.  Part of the house was destroyed by fire in 1904.  Nick Rodday took over the farm in the 1960s and renamed it Elm Brook Farm. It then became a riding school and a horse stable.  Elm Brook Farm was bought by Maureen and Peter Markey, who offered hayrides, trail rides, riding lessons, parades, and picnics there.

The Wheeler-Merriam House is located in a particularly historical Concord neighborhood. In 1678, Sergeant Thomas Wheeler built the Breen House next door at 341 Virginia Road as a wedding present for his son John and John’s wife Sarah Stearns.  In 1817, 341 Virginia Road became the birthplace of Concord author Henry David Thoreau.

In 1980, Anna M. (“Nancy”) Phalon took a special interest in the house, which was bought by her daughter Maureen Markey.   Her personal connection to the Wheeler-Merriam House led to the extensive research which comprises this collection.  Her hope was that her research would provide adequate documentation to place the house on the National Register of Historic Places.  On November 28, 1982, the house was accepted and certified as a national historic site.

SCOPE AND CONTENT:  The materials within this collection represent the research of Anna Phalon, and were used in support of her application to the National Register of Historic Places (the “NRHP”) for the Wheeler-Merriam House at 477 Virginia Road, Concord, Massachusetts, which she prepared between 1980 and 1982.  The collection includes extensive genealogical notes taken by Anna Phalon on the Wheeler, Merriam, and Algeo families.  Property conveyances are documented through copies of deeds and probate documents dating from the time the house was built in 1692 to 1979.  The collection also contains photocopied original and reconstruction maps showing the property and surrounding area between 1754 and 1967.  The photographs in the collection are of the interior and exterior of the house, as required by the NRHP.  There is a small amount of correspondence between Anna Phalon and members of the Wheeler, Merriam and Algeo families.  The originals of the photographs incorporated in Anna Phalon’s application to the NRHP are found in Series II, Subseries B.  This collection contains both dated and undated materials.

NOTES AND COMMENTS:  Accessioned October 21, 2005; AMC 128.
Some folders, envelopes, and blank pieces of paper discarded at time of processing.  All newspaper articles photocopied fopr research use (the originals retained).

Folder 3:
Papers on the history of the Wheeler-Merriam House and other houses in the neighborhood (undated).

Folder 4:
Anna Phalon correspondence with members of the Wheeler, Merriam and Algeo families (1979-1981).