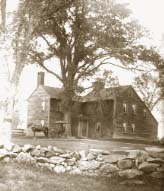 Hunt-Hosmer House, Lowell Road
Permission to reproduce this image in any form must be obtained from the Concord Free Public Library

Several Hosmer daughters—including Sarah and Jane, both of whose papers are represented in this collection—were public school teachers in Concord. In 1856, Sarah married Charles Lunt, with whom she had two children (Philip Henry Lunt in 1857, Eliza Hosmer Lunt in 1860), both born in Bedford. Widowed early, Sarah Hosmer Lunt remained in Bedford, died in Somerville in 1915. After their father’s death, spinster Jane Hosmer lived on with her sister Abby in the Lowell Road house. She died in Concord in 1922.

Concordian Alfred Winslow Hosmer (1851-1903) shared a common great-great-grandfather (Stephen Hosmer) with the children of Edmund Hosmer. A clerk, storekeeper, and photographer, A.W. Hosmer was also an early Thoreauvian. To promote greater appreciation of Thoreau’s life and work, he photographed many locations associated with the author and shared information with fellow Thoreau devotees, including Samuel Arthur Jones, Henry S. Salt, and H.G.O. Blake.

SCOPE AND CONTENT: The collection (1822-1914), originally held by the New York Society Library, consists of papers of Jane Hosmer and Sarah Hosmer Lunt (two of Edmund Hosmer’s daughters) and of a few items of uncertain relation to the Hosmer materials. Jane Hosmer papers ([1862]-1909) include: letters to Miss Hosmer (one from Sophia Thoreau, [1862] May 2, asking for Edmund Hosmer to be sent to the Thoreau home to attend her dying brother Henry; one an appointment—a printed form with manuscript additions—from the New England Freedmen’s Aid Society authorizing Jane Hosmer to teach "Freed People in South Carolina," 1865 Oct. 17; one a note from Edward Waldo Emerson, [1892] Oct. 17, informing Miss Hosmer about his mother’s death and funeral); and two printed items (a reprint of Samuel Arthur Jones’s 1890 Thoreau: A Glimpse; and a keepsake pamphlet issued on the death of Ellen Emerson, In Memoriam E.T.E., 1839-1909). Sarah Hosmer Lunt papers (1877-1914) include: two letters from Anna Bronson Alcott Pratt ("Annie Pratt"), one (1878 Oct. 4) declining an invitation to the "Harvest Festival," the other (undated) arranging for a visit by Sarah Lunt and her daughter; two printed items (Alfred Winslow Hosmer’s 1895 Chronology of the Life of Henry D. Thoreau; and Henry Thoreau’s Mother, 1908); two manuscript copies of  "Memories of Concord," a1914 lecture (anecdotal reminiscences) by Sarah Hosmer Lunt about Concord’s 19th century authors; an autograph book (1877-1883) possibly owned by Mrs. Lunt or by one of her children; nineteen leaves from a disbound album containing photographs ([ca. 1885]-[not after 1903]) of Concord sites by Alfred Winslow Hosmer (all but one captioned by Sarah Lunt), and three Hosmer photographs mounted on heavy stock (one of the First Parish in Concord before the fire of 1900; one copied from the 1861 Dunshee ambrotype of Thoreau; one of a silhouette of Cynthia Dunbar Thoreau, Henry’s mother). The unattributed/unidentified material (1822 and undated) includes an invitation (printed on heavy stock) to a ball at Ezekiel Nickles’s Hall in Carlisle on 1822 Apr. 11, made out in manuscript to Saml. B. Buttrick (no Hosmer family involvement with the ball or connection to Buttrick discovered); fragmentary undated manuscript notes (or possibly a lecture) on scientific subjects, author unidentified; and a mounted carte de visite photograph of an unidentified dark-haired, dark-eyed, bearded young man.

SOURCE OF ACQUISITION: Gift of the New York Society Library, 1999.

[Jones, Samuel Arthur]. Thoreau: A Glimpse. A Paper Read Before the Unity Club of Ann Arbor, Michigan, on Monday Evening, December 2nd, 1889. Supplemented by a Bibliography of Thoreau. Reprint from The Unitarian of January, February and March, 1890. Inscribed in pencil on front of printed wrapper: "Miss Hosmer."

ALS, Annie Pratt [Anna Bronson Alcott Pratt] to "Dear Mrs. Lunt," 1878 Oct. 4. A.P. declines an invitation from S.H.L. to the "Harvest Festival," refers with fondness to all of the Hosmer sisters, and encourages a visit to the "Thoreau house" (the Yellow House, on Main Street).

ALS, Annie Pratt to "My Dear Mrs. Lunt," "Tuesday P.M." A.P. arranges and looks forward to a visit by S.H.L. and her daughter.

"Memories of Concord": manuscript lecture (anecdotal reminiscences) by Sarah Hosmer Lunt about Concord’s 19th century authors, 1914. Two copies: one copy written in a large hand for ease of delivery at the lectern (65 leaves, incomplete; lacks leaves 1-9 and the closing section found in the other manuscript copy); the second copy in the same hand but in script of normal size (XXXIII [i.e. 33] leaves, complete).

Autograph book, 1877-1883, owner not identified. The presence of many Bedford names makes it likely that the owner was a member of Sarah Hosmer Lunt’s family, or possibly even Mrs. Lunt herself, although the fact that she signed one of the pages suggests that the book was someone else’s. It may have belonged to one of her children. The volume includes the autographs of Ralph Waldo, Lidian, and Ellen Tucker Emerson, and of Daniel Chester French.

Nineteen disbound leaves from an album containing Alfred Winslow Hosmer photographs of Concord sites, ([ca. 1885]-[not after 1903]). Although the photographs are not identified as Hosmer’s, comparison with Hosmer holdings in the CFPL Special Collections shows them to be his work. The manuscript captions on the album leaves are in the hand of Sarah Hosmer Lunt.

Mounted portrait of Henry David Thoreau, copied by Hosmer from Dunshee ambrotype of 1861.

Mounted photograph by Hosmer of silhouette of Cynthia Dunbar Thoreau (H.D.T.’s mother), with pencilled caption in hand of Sarah Hosmer Lunt on reverse.

Invitation (printed, on heavy stock, the size of a ticket) to a ball at Ezekiel Nickles’s Hall in Carlisle on 1822 Apr. 11. The invitation is made out in manuscript to Saml. B. Buttrick. It is unknown whether members of the Hosmer family were involved with the ball or connected in some way with Samuel B. Buttrick.