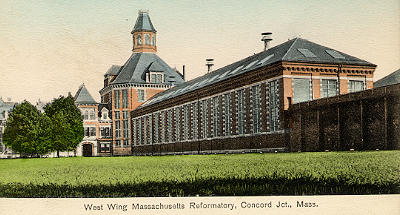 history: State correctional facility in Concord, Mass., opened in 1878.  Located in West Concord, the facility was originally called the Concord Reformatory, or Massachusetts Reformatory in Concord.  It is now known as the Massachusetts Correctional Institution at Concord (MCI Concord).  In the late 19th and early 20th century, the prison was important to the community because it provided employment opportunities for local people, and also because local businesses contracted inmate labor.

PROVENANCE: Established for two items: Connorton copy of 1937 photograph passed on by John J. Connorton to Mary Connorton; volumes of Our Paper formerly part of the collection of Peter Tufts Wetherbee.

RELATED MATERIALS:  This is an artificially created collection of materials relating to the Concord Reformatory/MCI Concord.  It does not constitute the official records of the prison, which are state records.  For further information about the location and availability of Massachusetts prison records, contact the Massachusetts Archives at Columbia Point.