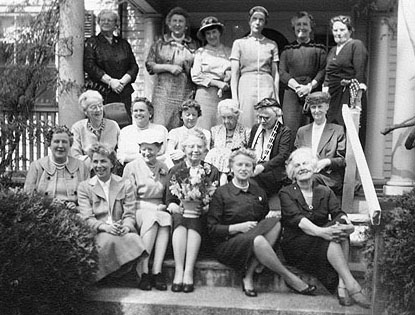 Not to be reproduced without permission from the Library

HISTORY: The Ladies’ Tuesday Club, a social club, was formed in 1888 by the wives of men in the in and the Men’s Tuesday Club.  It is still active today.  There were thirty-two members when the club was founded, but membership was later raised to forty, with five honorary members.  Mrs. John Chapman was elected president at the first meeting, and served for six years, after which the office of president was abolished.  By 1963, the only offices were secretary and treasurer.  The first version of the constitution was drawn up in 1896 to facilitate the election of new members.  It has been revised several times since.  The meetings have traditionally been held informally at member’s houses from early fall to late spring.  At the club’s centennial celebration in 1988, Secretary Margaret G. Little stated, “The genius of this club lies in the absence of any stated purpose other than the pleasure of being together once a month.”

SOURCE OF ACQUISITION: Most of the collection was presented to the library by Marian B. Miller, .  The one hundredth anniversary celebration records were the gift of Barbara Gifford, .