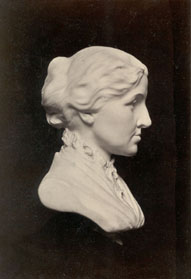 Photograph of Walton Ricketson's bust of Louisa May Alcott,
from the Special Collections Photofile

BIOGRAPHY: American author of novels, stories, and poetry, best known for Little Women and other juvenile novels. Sometime resident of Concord, Mass. Second daughter of Transcendentalist, educator, lecturer, and author A. Bronson Alcott and Abigail May Alcott. Born in Germantown, Penn., Nov. 29, 1832; died in Boston, Mass., Mar. 6, 1888. Her childhood was spent mainly in Boston and Concord. In 1843, she lived with her family at the Fruitlands utopian community in Harvard, Mass., returning to Concord in Jan. 1844. She was educated largely by her father, whose difficulty in supporting the family made it necessary for Louisa to contribute to the family income--as teacher, seamstress, governess, companion, domestic, and (ultimately and most successfully) writer. Louisa’s Flower Fables (a collection of fairy stories written for Emerson’s daughter Ellen) was published in 1855. Hospital Sketches (consisting of revised versions of Louisa’s letters home from Georgetown during a stint as a Civil War nurse) was published in 1863. Moods appeared in 1864, the first part of Little Women in 1868, the second in 1869. With the publication of Little Women, her success, popular and financial, was assured. From that point, she turned out sequels to Little Women and other juvenile works with remarkable regularity. She wrote extensively for periodicals and took on the editorship of Merry’s Museum in 1868. She published thrillers and potboilers pseudonymously under various names, notably as A.M. Barnard. Louisa May Alcott was a supporter of woman’s suffrage and of temperance.

SOURCES OF ACQUISITION: Partially established. Fairy stories and "Frost King": gift of Mrs. William H. Forbes and Dr. Edward Waldo Emerson, 1912; "Thoreau’s Flute": gift of Edith Guerrier, through Prescott Keyes, Oct. 10, 1934; Olive Leaf and ALS to Mrs. LeBrun: deposited by the Concord Antiquarian Society in 1971, presented by CAS in 1974; partial manuscripts for Eight Cousins and Under the Lilacs purchased  2015/2016 (through Marsha Malinowski, agent for seller). some of remainder of papers: gift of the Pratt family.

NOTES/COMMENTS: Most of the papers available on microfilm, for use in the Library. ALS to Mrs. LeBrun : transferred from Letter File (formerly Letter File 3, A21), Mar. 1995. Various items sent to NEDCC for washing, deacidification, mending, encapsulation, etc., 1975-1976. Papers listed in NUCMC (more inclusively than here described). Conservation measures undertaken on and new box created for partial manuscripts for Eight Cousins and Under the Lilacs by James Reid-Cunningham, 2016.

ASSOCIATED MATERIALS: Louisa May Alcott and Alcott family papers, Houghton Library, Harvard University (transferred from Concord Free Public Library; microfilm made in 1957 for use at CFPL).

Partial manuscript (~95 leaves) for Eight Cousins, prepared by the author in 1874 for serial publication in St. Nicholas Magazine in 1875.

Partial manuscript (~400 leaves) for Under the Lilacs, prepared by the author in 1877 for serial publication in St. Nicholas Magazine in 1877 and 1878.