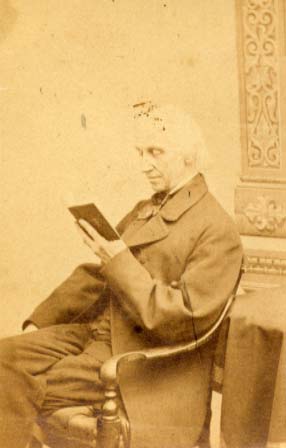 BIOGRAPHY: Physician; social statistician; author of books and articles on physiology, insanity, and social statistics; social historian of Concord, Mass. Son of baker/farmer Deacon Francis Jarvis and Milicent Hosmer Jarvis. Born in Concord, 1803; married Almira Hunt of Concord, 1834; died in Dorchester, Mass., 1884. Educated in Concord, Westford, and (1822-1826) at Harvard College, where he took a particular interest in chemistry and botany. Taught school during college winters and after graduation. In 1827, he began to study medicine, first with Dr. Josiah Bartlett of Concord, then at Massachusetts Medical College (Harvard Medical School). In 1830, having completed medical school, he established a practice in Northfield, Mass. He returned to Concord in 1832, practicing here until 1837. While in Concord, he became interested in vital statistics (under the influence of Lemuel Shattuck) and in the treatment of the insane. From 1837 until 1842, he practiced in Louisville, Ky. Following his return to Massachusetts, he settled in Dorchester, devoting himself to statistical research and to caring for the insane. Appointed by the Governor to the Lunacy Commission in 1854 to study the insane population of the state. Traveled to England and France in 1860, visiting asylums and attending the International Statistical Congress in London. Examined and criticized 1850 and 1860 census figures and prepared an extensive mortality report for the U.S. Congress. In 1863, he was appointed to inspect U.S. military hospitals. Member of professional societies and organizations and of the Social Circle in Concord. Temperance advocate. Late in life, Jarvis recorded research, lore, recollections, and analyses of life in his native town in Traditions and Reminiscences of Concord and Houses and People in Concord. Benefactor of the Concord Free Public Library.

SOURCE OF ACQUISITION: From Edward Jarvis (gift, bequest, and estate).

OUTSIDE FOLDER 1 (OUTSIDE BOX):
Item from Commissions and appointments folder (Folder 10).

OUTSIDE FOLDER 3 (OUTSIDE BOX):
Embossed charts for the blind (undated).

Journal of a Journey from Louisville to New Orleans… (1841).

Traditions and Reminiscences of Concord, Massachusetts, or, A Contribution to the Social and Domestic History of the Town, 1779 to 1878 (1880).

Shattuck, Lemuel. A History of the Town of Concord … (Boston: Russell, Odiorne, 1835).
From the estate of Edward Jarvis.
Accession number 18981 (accessioned Apr. 23, 1885).
Inscribed on front lining leaf : Gift of my beloved father / Francis Jarvis / in 1838.
Also inscribed, beneath the above: Edward Jarvis / Louisville / Ky.
Presentation inscription to Concord Free Public Library (1877) below other inscriptions on front lining leaf.
Heavily annotated, interleaved, and extra-illustrated by Jarvis.

Note: Image not to be reproduced in any form without permission from the Concord Free Public Library.