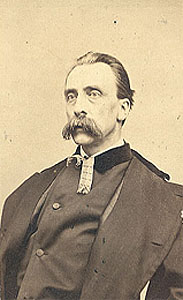 FAMILY HISTORY: Daniel Hudson came to America from England in 1640 and lived in Watertown. Between 1643-1651, Daniel settled in Lancaster, Massachusetts. In 1676, Indian attacks forced the settlers to seek shelter in Concord. In 1679, Daniel returned to Lancaster to help rebuild the settlement. On September 22, 1697, Indians attacked Lancaster, killing at least nineteen people, including Daniel Hudson, his wife, Joanna, two of his daughters, and two grandchildren. Daniel's son Daniel, a direct ancestor of Frederic Hudson, is assumed to have remained in Concord following the 1676 Indian attack. Daniel and Joanna Hudson had eleven children. In the seventh generation, Frederic Hudson was born in Quincy. He had close family ties in Concord. Frederic's three aunts -- Lucy Buttrick (Mrs. Jonas), Matilda Farrar (Mrs. Timothy) and Susan Barrett (Mrs. Samuel) -- lived in Concord. Woodward Hudson was in the eighth generation, Marion Hudson Wilmot (Woodward's daughter) in the ninth. Marion did not have any children.

A. Frederic Hudson (1819-1875) was a prominent figure in 19th century journalism. For many years he served as managing editor of the New York Herald. He was one of the founding members of the Associated Press. Upon his retirement from the New York Herald, Frederic Hudson wrote the History of Journalism in America from 1690-1872. The 800 page volume covered journalism from the earliest period in America and included Hudson’s own personal experiences and anecdotes.

He was born in Quincy, Massachusetts, the youngest child of Barzillai and Rebecca Eaton Hudson. He was educated in Boston and Concord. In 1830 he graduated from the Mayhew School in Boston. When Frederic was fifteen, his father relocated to Concord.

At the age of seventeen, Frederic joined his two older brothers in New York City. He worked on a short-lived paper called The Express and then served as a clerk for the city.

In 1837, Frederic began working for The New York Herald, a paper established in 1835 by James Gordon Bennett, Sr. He began as the ship news and foreign news collector and worked his way up to managing editor. Hudson acted as managing editor as early as 1846, while Bennett was away. Hudson was able to secure information well ahead of the local newspapers and government by establishing a system of expresses and agreements with papers and telegraph wires in other locations. He worked for the Herald, with the exception of six months, until his retirement in 1866. For six months in 1838, he worked for Horace Greeley.

In 1848-9, the Associated Press was established by New York papers as a way to coordinate shipping news. In a tribute to Frederic Hudson that appeared on October 22,1875, The Herald wrote "...in those early days the control of the association fell naturally into the hands of Mr. Hudson and the late Mr. Henry J. Raymond, and they together laid the foundation for the success afterward attained when the telegraph necessitated a consolidation of interests." At the time of his retirement, Frederic Hudson had served for fifteen years as the Herald’s representative and a member of its executive committee.

Frederic Hudson's wife, Eliza Woodward, had been born in Concord. Throughout his working years, Hudson periodically returned to Concord to visit. Upon retirement, he returned to Concord to live. In Concord, Frederic wrote History of Journalism in America from 1690-1872. In 1875 he wrote "The History of the Concord Fight" published by Harper's Magazine for the 100th anniversary celebration of April 19, 1775. He was involved with the management of the Concord Free Public Library from its incorporation in 1873, serving as chairman of the library committee from 1873-75. At the time of his death he was writing a portion of a new town history.

Frederic Hudson died from injuries sustained in a train accident on October 21, 1875. The carriage he was riding in, driven by Judge (John) S. Keyes, was struck by railroad cars. The custom was to separate the engines from the cars just before railroad crossing. The engine would go ahead to a sidetrack, the cars would go into the station. As Keyes approached the crossing, the engine had passed. A flagman tried to warn them of the cars following but Judge Keyes proceeded to drive onto the tracks. One of the wheels was struck by a railroad car, Judge Keyes was thrown from the carriage and suffered minor injuries. Frederic Hudson was dragged in the carriage about twenty feet and down an embankment. He died twelve hours later of internal injuries. The tragedy of his death spread quickly and numerous press notices were published. The press notices portrayed a well-liked, respected man who died before his time. He left behind his wife, Eliza, and son, Woodward.

Upon the death of his first wife, the elder Ebenezer Woodward married Eliza's mother, Persis Davis, widow of Jonathan Hubbard Davis. Persis had three daughters and one son from her first marriage. The Davis family materials in this collection contain information about the Davis children.

Prior to marrying Frederic, Eliza was a schoolteacher. The couple married in May, 1844. Their son, Woodward, was born in 1858. In her later years, Eliza suffered from fragile health. Frederic retired early in 1866 to care for her. She died within a year of Frederic's accident. Woodward was their only child.

C. Woodward Hudson (1858-1938) son of Frederic and Eliza Woodward Hudson spent most of his career as a railroad lawyer. He received both his undergraduate and law degrees from Harvard University (1879 and 1882). Throughout his life Woodward, remained involved the activities of the Harvard Class of 1879.

He began his career working for the firm Ropes, Gray and Loring for one year. From 1885-87, he formed the partnership Parker, Thorp, Hudson with classmates Joseph G. Thorp and Edmund M. Parker. In October, 1887, Hudson became the Assistant Counsel to the Boston & Albany Railroad Company. Samuel Hoar, of Concord, served as the General Counsel. In October, 1899, the Boston & Albany railroad franchises and property were taken over by the New York Central and Hudson Railroad Company. The New York Central retained Samuel Hoar and Woodward Hudson as counsel. Upon the death of Samuel Hoar in 1904, Woodward became the head of the law department, remaining in that position until 1916 when he became the Vice-President and General Counsel of the Boston & Maine Railroad. He retired on March 31, 1925.

Both Woodward and Frederic showed interest in family history, as demonstrated by the genealogical notebook located in Series III. Subseries A. Genealogy. The collection represents Woodward's efforts to record family history. Woodward added notes and articles to materials in his father's papers (now located in the Frederic Hudson series). Examples include Frederic's copy of "The Concord Fight" and Frederic's newspaper clipping journal. Woodward also accumulated information from his father's papers into Fragmented Chronicles of Frederic & Eliza Hudson, 1817-1876 With Some Earlier Family History. This chronicle includes a family tree and information on Dr. Ebenezer Woodward.

Woodward died in 1938. His wife, Bessie, and daughter, Marion Hudson Wilmot, survived him.

D. Bessie Keyes Hudson (1857-1942), wife of Woodward Hudson came from a distinguished family in Concord. She was the daughter of George and Mary Brown Keyes and granddaughter of Simon and Ann Caroline French Brown. Simon Brown served as Lt. Governor of Massachusetts from 1855-6 and as the Concord representative in the Massachusetts legislature of 1859-60. Ann Caroline Brown was the aunt of Daniel Chester French. Bessie's uncle was John Shepard Keyes, a lawyer, Massachusetts state senator, Sheriff of Middlesex County, and District Court Judge.

Woodward and Bessie married in 1880. With the exception of the two years abroad, they lived in Concord. They had two children, Frederic and Mary, who died in infancy, and had one daughter, Marion Hudson Wilmot who survived them. Bessie died in 1942.

SCOPE AND CONTENT: Papers include: Diaries (1851-1870) and correspondence (1835-1875) of Frederic Hudson, Frederic's personal copy of "The Concord Fight," his newspaper collection (1835-1875), a newspaper clipping journal (1846-1930) with newspaper articles that were collected by him and articles about him that Woodward (in all likelihood) put together. The diaries do not cover a consecutive span. Frederic's correspondence includes a letter from Sam Sinclair offering Frederic a job as the London agent for the Associated Press. The newspaper clippings journal has a copy of a letter, dated October 15, 1852, that gave Power of Attorney of the Herald to Frederic Hudson in the absence of James Gordon Bennett; an interview with Hudson in Concord, articles about the Herald, the origin and resolutions of the Associated Press and numerous obituaries and tributes written about Frederic Hudson. Woodward Hudson papers include: diaries (1882-1916), correspondence (1882-1929), Harvard Class of 1879 materials (1879-1930), career papers (1904-1935), Social Circle memoirs (1919-1938), and a scrapbook (1874-1915). Two of the diaries (1878 and 1877) Woodward wrote on vacations to Lake Winnipeasaukee, Mt. Monadnock, and to Lake George, New York. The other two diaries (1885-1926, 1882-1916) offer brief entries. The Social Circle memoirs of Woodward Hudson contain correspondence and typescripts of memoirs written by Woodward and about Woodward. Woodward wrote memoirs for Francis Augustine Houston (1858-1919) and William Wheeler (1851-1932). Official notices, a telegram, and one handwritten note marking appointments and resignations are located in Career papers. Woodward's scrapbook has memorabilia/ephemera from events that took place in Concord and sporting events that involved Harvard University teams. Bessie Keyes Hudson papers include articles and memoirs (1900-1936), diaries, correspondence and poem (1861-1935). Articles include published materials that appeared in The Concord Journal and New England Magazine, and unpublished materials. Her unpublished work, "Memories of Mrs. E.R. Hoar (Caroline Brooks) 1820-1892" offers rare insight into the life of Caroline Brooks Hoar. Letters dating 1882-1884 between Bessie and her father are located in a correspondence. The letters were written when Bessie and Woodward travelled throughout Europe. Located with the letters is a Cunard Steam Ship Company brochure of the R.M.S. Pavonia. The brochure, dated May 28,1884, lists the passengers aboard its Liverpool to Boston trip. An interior diagram of the Cephalonia and Pavonia with Bessie and Woodward's cabin marked is also included with the correspondence. Genealogy materials include correspondence (1920-1934), a family record book (1862) with entries added until the early 1900's, a notebook kept by Frederic and Woodward Hudson (N.D.), Eaton family materials, (1932-1935), Davis family materials, (1893-1935), Simon Brown ancestry work, (1832, 1932-1933, plus undated) and miscellaneous family papers, (1902-1933). A transcript of a diary entry written by Simon Brown in 1837 can be found with the Brown materials. Newspaper clippings, such as obituaries, can be found throughout that series. Family papers (1663-[1926]), include photocopies of wills, inventory of estates, probate papers and deeds. The series of photographs [1846-1935] include portraits of Hudson and Keyes family members and places associated with them.

c2002-c2006 Concord Free Public Library. Not to be reproduced in any form without permission from the Library.