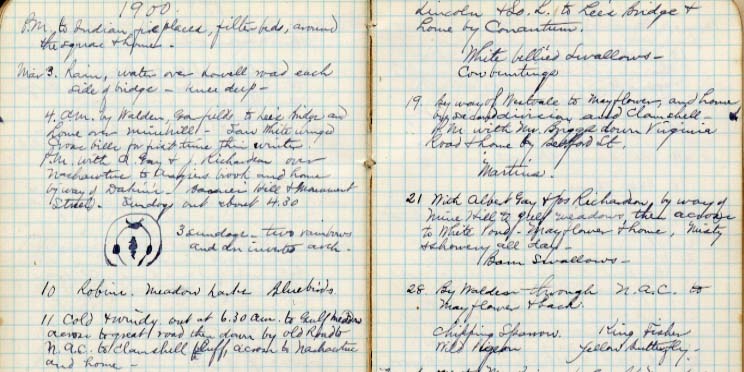 Enlarged selection from Hosmer's journal, 1900 Mar.
Not to be reproduced without permission from the Concord Free Public Library.

BIOGRAPHY: Alfred Winslow Hosmer was a photographer, naturalist, and early follower and promoter of Thoreau. He was born on June 4, 1851 to carpenter Nathan S. Hosmer and Sophia Wheeler Hosmer in the Lowell Road home where he lived his entire life. He made his living as a clerk, owner of a dry goods store, and photographer. He spent hours observing nature in Concord and vicinity and keeping detailed records of what he saw. He corresponded with others knowledgeable in the field and wrote articles for Rhodora on the plant life of Concord. An early admirer of Thoreau’s life and writings, Hosmer located, studied, and photographed the landscapes, flora, and fauna that Thoreau had known. He died in Concord on May 7, 1903, and is remembered for his photography and his role in establishing Thoreau as a major American writer.

SCOPE AND CONTENT: Holograph manuscript volumes, 1878-1903, including lists of flowers and times of blooming in Concord and vicinity, journal of natural history observations in Concord, records of flora and fauna in Concord. The nature observations and lists are primarily of Concord but also include references to nearby towns.

Notebook: list of flowers found in various places in the United States (primarily Concord, Mass.), 1888-1893, with dates of bloom. Some are noted as "introduced." Presented by Herbert Buttrick Hosmer, Dec., 1952.

List of flowers found in Concord and vicinity by Alfred W. Hosmer; Copied from his diary; Dates given are the average date of bloom. Some entries bear note: "First reported from the country 1894." Presented by Laurence E. Richardson, Nov., 1952.