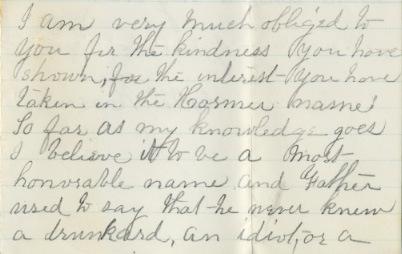 EXTENT: 62 items in one container.

BIOGRAPHY:  Henry Joseph Hosmer (February 2, 1832 – November 14, 1902) was a prominent figure in Concord, Mass.  Hosmer held the position of Treasurer and General Manager of the American Powder Company of Acton, Mass.  He was a Representative to the General Court from 1884-1887, and from 1889-1990 a state Senator.  Hosmer was on the Concord Board of Water and Sewer Commissioners.  He was a Selectman, Treasurer of the Middlesex Institution of Savings (1893-1899), Director of the Concord National Bank (1881-1898), a Trustee of Town Donations, and a member of the Social Circle.  Hosmer also served as Treasurer of Concord’s Home for the Aged and for the Concord Antiquarian Society.

Born in Northfield, Mass., Hosmer was an eighth generation family member.  He was a descendent of James Hosmer (1605-1685), who emigrated from Hawkhurst, Kent, England in 1635, settling first in Cambridge, Mass. and then in Concord.  Hosmer married Laura Alan Ballou Whiting (September 26, 1833 - October 5, 1896) on December 3, 1874.  Laura Whiting, a widow, brought a daughter to the marriage, Florence Danforth Whiting.  Florence married Charles E. Brown, Town Clerk of Concord.  Henry and Laura Hosmer had one child, Henry Joseph Hosmer Jr. (June 8, 1876 – August 17, 1911), a lawyer, who married Edna Wadsworth Hudson on September 24, 1906.  The Hosmers lived at the present 363 Main Street in Concord.

SCOPE AND CONTENT: 62 items, 1875-1893, consisting of correspondence and notes to or from Henry J. Hosmer regarding genealogical inquiries he made to Hosmer family descendents in the mid-1880s.  (All but one of the letters is to Henry J. Hosmer.  The exception is a letter to Granville Hosmer.)  These materials were evidently accumulated in the process of assembling what George Leonard Hosmer described in his Hosmer Genealogy (Cambridge: Technical Composition Company, 1928), as Henry J. Hosmer’s “extensive collection of records of the Hosmer family” (p. 132).

PROVENANCE: The letters and notes arrived at the Concord Free Public Library wrapped in brown paper, with the following note on the inside of the wrapper: “In 1885 Henry J. Hosmer, son of Cyrus and Lydia Parkman (Wheeler) Hosmer attempted to trace the Hosmer genealogy. / The letters in this package were written to him in response to his request for family information. / These letters descended to Henry Hosmer’s son, Harry, and when Harry died his widow, Edna (Hudson) Hosmer Clater (Mrs. Irving B. Howe) sent then to Henry Hosmer’s sister, Mrs. D. H. Wood (Lydia (Hosmer) Wood, then of Montclair, N.J. She was the grandmother of Florence Wood (Holmes) Brainard and Elizabeth H. (Holmes) Baldwin.”

SOURCE OF ACQUISITION: Gift of the Concord Museum, August 11, 2005.

Copyright 2005, Concord Free Public Library, Concord, Mass. Not to be reproduced without permission from the library.