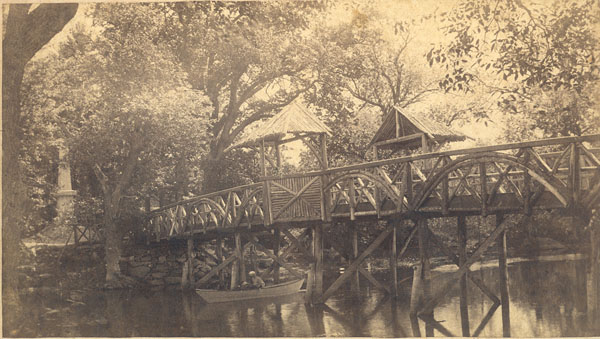 Image not to be reproduced without permission of the Concord Free Public Library
Finding aid copyright 1997.

BIOGRAPHY: Photographer, naturalist, and early Thoreauvian of Concord, Mass. Born in Concord on June 4, 1851, to carpenter Nathan S. Hosmer and his second wife, Sophia Wheeler Hosmer, in the Lowell Road house that was his home throughout life. He had a younger brother (Herbert Wheeler), as well as a half-sister (Ann Eliza) and half-brother (Nathan) from his father’s first marriage.

Educated in the Concord schools, Alfred Winslow Hosmer (known as Fred) attended MIT for a year. On his return to Concord, he worked briefly at carpentry, then took a job as clerk in the Concord post office, where he remained for fifteen years. Around 1890, he became clerk in the dry goods store of Charles E. Brown on the Mill Dam, in the center of Concord. In 1898, he bought the business from Brown. He died in Concord on May 7, 1903.

Fred Hosmer was involved in the social life of Concord and participated in amateur theater. He never married.

Hosmer is remembered for his role in establishing Henry David Thoreau’s reputation as a major American author. He was one of the earliest admirers and promoters of Thoreau’s life and writings. He expressed his sympathy with and interest in Thoreau through his own first-hand observations of the flora and fauna of Concord, his Thoreau-related photography, his correspondence with other Thoreau enthusiasts, and his active collecting of Thoreauviana.

When he wasn’t working behind the counter on the Mill Dam, Fred Hosmer spent hours locating, studying, and photographing the landscape features, plants, and animals that Thoreau had known and about which he had written. Hosmer photographs were used to illustrate Annie Russell Marble’s Thoreau: His Home, Friends, and Books (1902) and Frank Sanborn’s 1917 biography of Thoreau.

Hosmer’s botanical expertise was recognized during his lifetime. He kept manuscript records of what he had observed, corresponded with others knowledgeable about the subject, and wrote articles for Rhodora on the plant life of Concord.

Fred Hosmer collected first and later printings of Thoreau’s writings, material about Thoreau, and artifacts (both Thoreau-related and Native American). He corresponded with Thoreau scholars Dr. Samuel Arthur Jones, Henry Stephens Salt, and others. His Thoreau library and some of his personal papers were presented to the Concord Free Public Library in 1949 by Herbert Buttrick Hosmer (his nephew).

Sometime in the early to mid-1880s, Fred Hosmer took up photography in a serious way. The term "amateur photographer" has been applied to him a number of times. The extent and composition of his surviving photographic work, however, indicate that this description is misleading. No doubt Fred Hosmer photographed Thoreau country out of devotion to the author. But there is strong evidence that his photographic efforts were also inspired by the developing tourist trade of the 1880s and 1890s.

It is not difficult to locate examples of Hosmer cabinet cards. Some of these bear, pasted to the verso, printed listings of available scenes, captioned "Views in Concord, Mass., Photographed by A.W. Hosmer, Concord." Fred was clearly tapping into the growing popular demand for souvenirs. Moreover, a relatively broad range of subjects is represented among his cabinet cards. The "Views" include not only photographs capturing the haunts of Thoreau but also images relating to colonial and revolutionary Concord, to the various other Concord authors, and to what was, at the time, modern Concord (the Concord Free Public Library, the Emerson and West Concord Schools, and the Massachusetts Reformatory, for example). The cabinet cards even include some non-Concord scenes--the Wayside Inn in Sudbury, Longfellow’s house in Cambridge, O.W. Holmes’s library in Boston, and several New York State views.

The verso of some Hosmer cabinet cards bear the stamped or printed label "A.W. Hosmer, Landscape Photographer, Concord, Mass." But Fred Hosmer was more than a landscape photographer. He was also a studio photographer who made portraits of individuals and groups--formal and informal, indoors and outdoors, sometimes in the homes of his subjects. He took photographs of people’s children and of their pets. Presumably commissioned by homeowners, he took photographs of recently constructed homes as well as of historic houses.

The Concord Free Public Library holds over eight hundred of Alfred Hosmer’s glass plate negatives. It is not known how many more may be found in other collections nor how many have been lost over time. The two largest categories of images among the Concord Free Public Library Hosmer negatives are portraits and photographs of houses. The volume of work for hire that Fred apparently took on makes the word professional seem more applicable than amateur. Moreover, the technical quality of his work is high.

A life-long Concord resident and an eighth generation Hosmer in the town, Alfred Hosmer intimately knew and understood Concord, its people, and its influence on history and literature. This familiarity fostered a certain trust and candor in his human subjects and allowed him entrance to family circles and social events that would have been closed to a stranger. The fact that Fred’s work was carried on from the insider’s vantage point makes his photographic legacy a valuable form of social history.

Most of the negatives are gelatin dry plate of a size suitable for making cabinet cards. The collection includes some smaller and some larger plates, and some wet plate collodion negatives as well. Although the use of wet plate collodion predates the introduction and widespread availability (from about 1880) of gelatin dry plate negatives, the two were used simultaneously long after the latter became popular. There is no evidence that the collodion negatives in the Hosmer Collection are earlier than the gelatin negatives. (In fact, some of Hosmer’s copying of Thoreau-related portraits using collodion can be dated through evidence in his correspondence to relatively late in his life.) It seems likely that Fred Hosmer had a technical reason to prefer collodion for certain types of images, even close to the turn of the century.

Series IX. Composites: 13 images, including composites relating to Concord authors and history together, to Concord authors, to the Alcotts, to Louisa May Alcott and Henry David Thoreau (together in one composite), to Emerson, and to Thoreau.

Series XII: Miscellaneous (primarily photographs of maps, engravings, paintings): 13 images, including a map of Concord, the Doolittle engravings of Concord and the Battle of Concord, Stillman’s Philosopher’s Camp, and a photograph of the U.S.S. Concord, among other items.

SOURCES OF ACQUISITION: Presented to the Library in at least two, and possibly three, accessions. Most of the plates were presented by Herbert Buttrick Hosmer. A later, smaller gift was made by Patience Hosmer MacPherson. The source of the third group of plates (if they constitute a separate accession and were not part of the Hosmer or MacPherson accessions) is unknown.

ADDITIONAL PHYSICAL FORMS AVAILABLE: Positive microfilm service copies available for use in the Library and for interlibrary loan. (The microfilm was prepared through National Historical Publications and Records Commission grant number 97-063.) The Library owns copy negatives for the provision of prints for patrons (also prepared through NHPRC grant number 97-063). Information about interlibrary loan, the provision of prints, and reproduction fees and restrictions is available from the Curator of Special Collections. Early prints, including cabinet cards, of some Hosmer images (and of others not represented in this collection of negatives) are found in boxes in the Special Collections and scattered through the Library Photofile. There are also copy prints of some images in the Photofile and modern contact prints of some in albums.