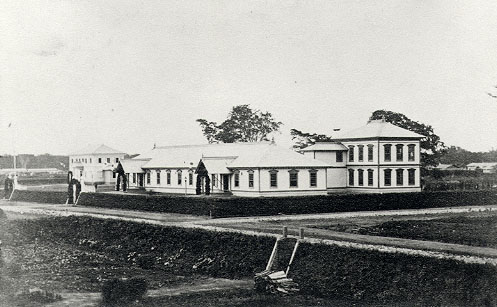 BIOGRAPHY AND HISTORY: William Wheeler, resident of Concord, Mass.; 1871 graduate of the Massachusetts Agricultural College at Amherst, Mass. (now the University of Massachusetts, Amherst); Married Fannie Eleanor Hubbard of Concord, Mass. on July 17, 1878 in the United States, she returned to Japan with him after their wedding; Professor of Civil Engineering, Mechanics and Mathematics at Sapporo Agricultural College, Japan from 1876-1877; Played instrumental role in leadership of Sapporo College after William Clark’s departure from May 1877-1880; Civil Engineer of the Imperial Colonial Department of Japan from 1878-1880; Decorated by Prince Regent Hirohito with the Fifth Order of the Rising Sun, Double Rays, in 1924 for his service to Japan.  Wheeler was a member of the Concord Social Circle; Served the town of Concord, Mass. from 1871-1876 and 1881-1932 in multiple capacities including on the Sewer Board, School Committee, Board of Health, Municipal Light Board, Corporation of the Concord Free Public Library, and as Town Meeting moderator; Constructed and developed the water and sewage works for Concord, including building the Nashawtuc and Annursnack Reservoirs; Served on the boards of the Middlesex Mutual Fire Insurance Company, Middlesex Institution for Savings, and Concord National Bank.

Sapporo Agricultural College (now Hokkaido University) was founded as the Sapporo School in 1875.

RESTRICTION ON USE: Any use of copy images in this collection requires the permission of the owner of the original photographs.

Series I.  History of the William Wheeler Photograph Collection, 1997: Short biography of William Wheeler, and his contributions to Hokkaido, Sapporo Agricultural College, and Concord, Mass.  Also includes timeline and bibliography for the photograph exhibition.

SOURCE OF ACQUISITION: Copies of original photographs for a Concord Free Public Library gallery exhibition funded through the library’s Hoar Fund, and a grant from the Concord Cultural Council, a local agency supported by the Massachusetts Cultural Council.  Original photographs owned by Barbara Wheeler; exhibition arranged for by Susan and Tom Curtin.

PROCESSED BY: Karen Chmielewski, May 2007

Series I.  History of the William Wheeler Photograph Collection, 1997

Folder 1:
William Wheeler and the Hokkaido-Concord Connection, timeline and bibliography

Folder 8:
“Mustache Lifter (as used by the Ainos)”

Folder 9:
“Sleeping it off”