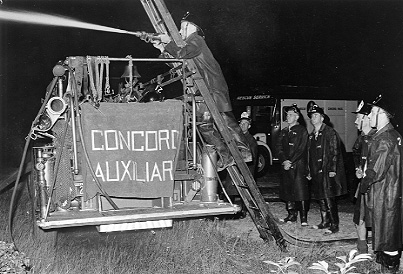 BIOGRAPHY AND HISTORY: Charles L. Hanson, Jr. (1917-2000) and his wife Barbara B. Hanson (d. 1998) moved to Concord, Massachusetts, in 1951, and were among the earliest residents of Concord’s first major real estate development, Conantum.  Conantum, also known as Kalmia Woods, was the largest Modernist development in Massachusetts at the time of its construction.  The homes in Conantum were designed by architect Carl Koch, who went on to create the Techbuilt modular home based on his experience designing the Conantum homes.  Conantum was developed and promoted by Koch and MIT professor W. Rupert Maclaurin, and attracted young couples and families, particularly from MIT and Harvard.  Conantum evolved into a closely-knit neighborhood with numerous clubs and frequent social events.
Hanson was an industrial photographer who worked for Arthur D. Little and later the Smithsonian Astrophysical Observatory, both in Cambridge.  For much of the 1950s through the 1970s, he was an auxiliary member of the Concord Fire Department (CFD), and during that time took many photos of CFD activities, both as an official photographer and for his personal collection.  Hanson was a member and officer of Industrial Photographers of New England, and an avid photographer of events in Conantum and Concord.  In later years, he maintained and beautified common property throughout Concord, creating plantings and helping to clear intersections of obstructing plant growth.  Barbara Hanson was a homemaker who volunteered extensively with area organizations, including among others Emerson Hospital, the Concord Council on Aging, and the Conantum Garden Club.

SCOPE AND CONTENT:  Series I (Hanson residence and personal papers, 1951-1992) contains correspondence, bills, and other documents relating to the Hanson’s purchase of Lot 56 in Conantum, and the construction and maintenance of their home.
Series II (Conantum, [1951]-1996) contains extensive photographs, negatives, and slides showing the early years of the Conantum development.  These images include numerous views of construction occurring throughout Conantum, views of many Conantum homes shortly after their completion, and candid shots of Conantum residents (including images of early neighborhood celebrations).  The slides in Series II are indexed separately in the Appendix to this finding aid.  Also in Series II are several iterations of Conantum-related documents created by the Hansons, including maps, telephone lists, and address directories.  Additionally, Series II includes publications of the Kalmia Woods Corporation, articles about Conantum from various newspapers, publications about Conantum by residents, and other documents relating to the administrative and social life of the neighborhood.
Series III (Concord Fire Department, [1953-1970s]) consists primarily of photographs and negatives of Concord Fire Department equipment and facilities, social events, training exercises, and disaster response during the 1950s and 1960s.  Some of these photographs also show equipment and personnel of the Acton Fire Department.  Also included in Series III are different versions of the Concord Fire Department alarm box directory showing the locations of alarm boxes throughout the town.
Series IV [Concord government and civic life, [1950s]-2000) includes a variety of photographs of civic life in Concord; these include images of parades and other celebrations, town meetings, high school athletic events, Boy and Girl Scout troop activities, and buildings and landscapes around the town.  Series IV also includes publications issued by the Concord town government, the Concord Chamber of Commerce, and Concord residents.
Series V (Maps of Concord, 1947-1973) contains commercially produced maps of Concord, including commemorative maps about Thoreau and colonial Concord, and general maps of the town.  Several USGS maps are included in this series.

NOTES/COMMENTS: Accessioned April 30, 2009; AMC 172.  Unless specified below, photos in this collection are not captioned or otherwise identified.

Box 1, Folder 3:
Correspondence and documents relating to purchase of lot and house (alphabetically by correspondent), 1952.

Box 1, Folder 5:
Invoices, correspondence, and other documents relating to utilities and household maintenance, [1952]-1958.

Box 1, Folder 7:
Correspondence relating to gifts received by Hanson from his father, 1957. 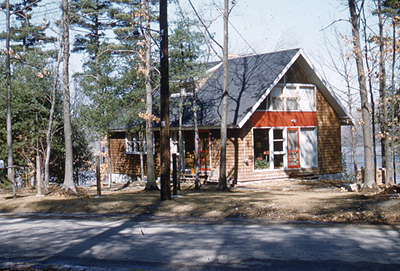 Box 2 (slide box):
Slides shown by Hanson at Conantum 40th Anniversary Celebration, in the order they were shown by Hanson.  These slides contain many images of Conantum’s early years.  For an index to these slides, see the Appendix to this finding aid.

Box 5, Folder 5:
Photos used in 1966 Town Report, and correspondence regarding same. (Photos are duplicates of others in this collection.)

Box 5, Folder 6:
Photos not used in 1966 Town Report, and correspondence regarding same. (Photos are duplicates of others in this collection.)

Appendix: Index of Slides in Box 2