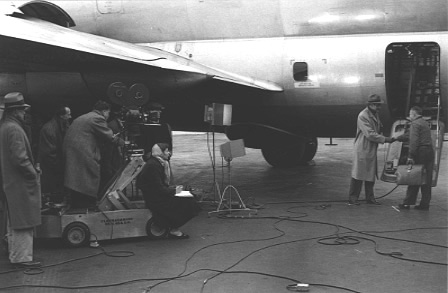 ORGANIZATION: Organized in a single series.

A 39,840 sq. ft., two-bay steel structure, Hangar 24 was built at Hunter Army Airfield in Savannah, GA (ca. 1930s), where it was later disassembled, transported north, and reassembled at Hanscom Field in 1948. In addition to the pioneering work of MIT and Draper Labs, in 1986 the hangar was the site of the construction of the human-powered Eagle, an aircraft with a wingspan of 102 feet, but weighing only 69 pounds. Loosely based on the Greek myth of Daedalus and Icarus, it successfully completed a flight between Crete and the Greek mainland.

In 2001 MIT established a new flight facility at Hanscom Field and all operations at Hangar 24 ceased. It is currently Massport’s desire to raze the building, while various area organizations are seeking to preserve it for its historic value. The structure is designated as eligible for landmark status by the National Register of Historic Places.

SCOPE AND CONTENT: The collection includes a report on Massport Hangar 24 prepared by Public Archaeology Laboratory (PAL), July 2010. There are two copies of the report, one bound and one unbound. There are two sets of photographs, one set contains thirteen historical images of the facility, 1948-1975; the other contains thirty-six images taken in July 2008 by Matthew M. Kierstead for PAL.