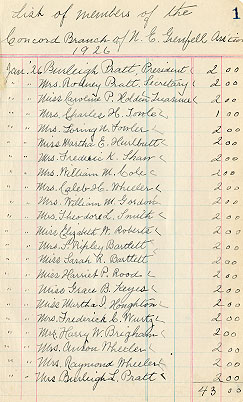 HISTORY:  The International Grenfell Association, founded by Sir Wilfred Grenfell, was incorporated in Canada in 1914.  Its original mission was to provide health care, educational, religious, social welfare, and community services support to fishermen in Newfoundland and along the Labrador coast.  Gradually, the primary focus became medical care for the region through various nursing stations and the Curtis Hospital in St. Anthony, Newfoundland.  Three offices in New York, Boston, and London were responsible for gathering money and new and used clothing through independent, local branches of the Grenfell Association, one of which was the Concord Branch.  Sir Wilfred Grenfell supplemented this funding through the collection and sale of native crafts, including small ivory carvings of dogs and seals, models of kayaks, soapstone lamps, snowshoes, beadwork, and hooked rugs and mats (Grenfell hooked textiles).

The Concord Branch of the New England Grenfell Association first met on 27 January 1926 at the Union Church in West Concord.  By the end of the first year Concord was the 11th, and largest, branch in New England.  Annually, they contributed $100.00 for upkeep of a bed at the Curtis Hospital, and contributed smaller sums to Dr. Curtis for discretionary purposes.  In 1951, after twenty-five years, the branch was still supporting the “Concord Bed,” with various local church organizations and a girls’ club continuing to contribute to the Grenfell Mission.  In 1964, however, in the face of an aging and steadily declining membership, as well as difficulties in fundraising, the decision was made to terminate the Concord Branch.