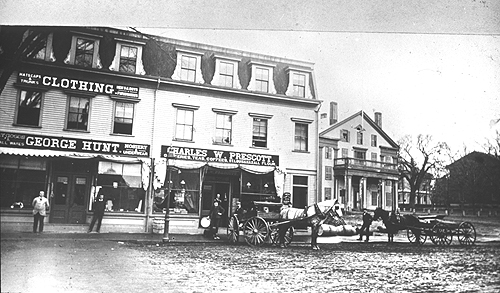 No. 28. Mill Dam, north side, and Monument Square—showing George Hunt
and Charles W. Prescott stores, and the Middlesex Hotel

EXTENT: 105 distinct lantern slides (3 ½” x 4”), plus 8 duplicate slides and 56 negatives, of images of Monument Square and the Mill Dam in Concord , Mass. (photographs, illustrations, and maps), housed in three boxes.

BIOGRAPHY: Author, historian, antiquarian, and resident of Concord , Mass. ; lecturer on historical and other topics; instructor in English at Harvard and the Massachusetts Institute of Technology. Born in Boston , November 28, 1870 , to John James and Frances Maria Stratton French. Attended Boston schools, M.I.T. (S.B. 1892), the University of Berlin (1892-1893), and Harvard (A.B. 1894). Married Ellen Dorrance and moved to Concord in 1898. The couple had three daughters. Ellen French died in 1918; Aletta Lillibridge became Allen French's second wife in 1922. Allen French was a prolific writer of juvenile stories for serial and book publication and of historical fiction, books based on Icelandic history, works on gardening, and studies of Colonial, Revolutionary, and Concord history. His historical titles include The Siege of Boston (1911), Old Concord (1915), The Day of Concord and Lexington (1925), A British Fusilier in Revolutionary Boston (1926), and The First Year of the American Revolution (1934). His guidebook Historic Concord was first issued as a thin pamphlet in 1924 by the John Hancock Mutual Life Insurance Company, republished in revised and expanded form in 1942, later reissued. (It is still available as revised by David Little and published by the Friends of the Concord Free Public Library.) French traveled to England to read original documents (the Gage papers and other primary materials) relating to the Revolutionary period. Deacon and Sunday school superintendent at the First Parish in Concord, vice president and president of the Concord Antiquarian Society, member (1909-1946) and long-time chairman of the Library Committee of the Concord Free Public Library, member of the Social Circle in Concord from 1919 until his death, founding member and vice president of the Thoreau Society, member of the Saturday Club and Dramatic Club in Concord and, beyond the town, of the Harvard Club, Massachusetts Historical Society, Colonial Society of Massachusetts, New England Historic Genealogical Society, American Antiquarian Society, and Society for the Preservation of New England Antiquities. French died at his Nashawtuc Road home on October 6, 1946.

SCOPE AND CONTENT: A collection of glass lantern slides primarily of the Mill Dam/Monument Square area of Concord , Mass. , prepared by Allen French for lecture purposes between about 1920 and 1930. Also includes images of other historic Concord sites and landscapes (Orchard House, Antiquarian House, North Bridge , Concord River , etc.). The slide images come from photographs, drawings, and maps. The original images from which slides were prepared date from between 1775 and about 1925. Some images are from illustrations by Lester Hornby for Allen French's Old Concord (1915), some from illustrations in J.W. Barber's Historical Collections (1840). Some were created using Allen French's own hand-drawn maps and sketches.

SOURCE OF ACQUISITION : Probably the gift of Allen French.

ACESS/USE: Because these images are fragile, access to them is at staff discretion. All uses of them are subject to the Concord Free Public Library's reproduction and use policies.

Box 1 (plus negatives and duplicate slides as indicated):
1.   No slide.

5.   Location of Concord rivers, brook, hill, and ponds: drawing by A. French.

7.   “The various sites and their influence”: drawing by A. French.

14.   Amos Doolittle, “Plate II. A View of the Town of Concord ” (1775): engraved illustration (plus negative and duplicate slide).

23.   Mill Dam, ca. 1865, south side, labeled “The Milldam about 1865, as calculated by Mrs. Prescott Keyes from the apparent ages of Mrs. Keyes and Mrs. Richardson who show in this picture”: photograph (plus negative).

26.   Mill Dam in snow, perhaps around 1865, looking west, showing both sides of the street: photograph (plus negative).

Box 2 (plus negatives as indicated):
41.   “The Wright Tavern Decorated for the centennial, 1875”: photograph.

42.   “Wright Tavern before 1882 — the ell at full length. Stereograp[h] of Mrs. P. Keyes,” including fountain and flag pole in foreground: photograph (plus negative).

50.   “The Old Tree at the Town Hall”: Lester Hornby illustration (plus negative).

65.   “The Roll of Honor (‘Glory Board') on Middlesex Grounds [former site of Middlesex Hotel], summer of 1919”: photograph (plus negative).

66.   Middlesex Hotel in disrepair, cannon in foreground: photograph (plus negative).

67.   “Court House and Town Hall, Concord,” labeled by A. French “From [Walling] county map of 1856”: engraved illustration (plus negative).

Box 3 (plus negatives as indicated):
76.   Monument Square, looking out from Colonial Inn site, between 1885 and 1895: photograph [by Alfred Winslow Hosmer] (plus negative).

82.    Concord River and 1875 version of North Bridge (with gazebos): photograph (plus negative).

86.   The Old Chapter House of the D.A.R.: Lester Hornby illustration (plus negative).

89.    First Parish Church, after 1900 fire and rebuilding: photograph (plus negative).

[104]. Streets and buildings of Monument Square and Mill Dam, in red (features unlabeled): A. French drawing.

[105]. Separate slide with labels for streets and buildings of previous slide (no buildings or streets shown — only captions, which fit precisely with features in [104]): A. French lettering.