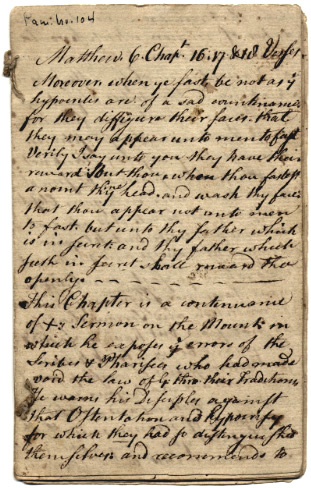 ORGANIZATION AND ARRANGEMENT: Organized into two series: I. Original sermons and oration by Reverend Edmund Foster, (1781-1806); II. Letters regarding the gift of papers by Nathaniel Seaver, Jr., 1876. Materials arranged chronologically.

BIOGRAPHY: Reverend Edmund Foster (1752-1826) was born in North Reading, Massachusetts. He was orphaned at seven. As a young adult, Reverend Foster attended Yale, where he studied for the ministry. Later, he received honorary degrees from Yale and Harvard. While a divinity student in April 1775, Reverend Foster marched among the ranks of the minutemen, at Concord and Lexington.  In 1781, he was ordained as minister of the Littleton parish, (subsequently known as the First Congregational Church and the Unitarian Church). An outspoken opponent to the introduction of new churches into the Littleton community, Reverend Foster served his parish for 46 years. He was also politically active, representing his district in the Massachusetts Senate and the House of Representatives after the War of 1812, and serving as a delegate to the Constitutional Convention in 1820.  Reverend Foster had three sons who held commissions in the War of 1812. His daughter, Sarah, married Reverend William H. White, of the Littleton. Reverend Foster died in 1826.

The four hand-bound sermons span 25 years. Three sermons relate to Bible passages and religious topics; one is political in nature.

The printed oration, written for the 30th anniversary of America’s independence, is an ode to the U.S. government and American democracy. The content is political and social; there are very few religious references. The inside cover is inscribed by Samuel Reed of Littleton, John Leighton of Westford and Josiah Taylor of “Lyttleton.”

The accompanying letters were written to the Concord Free Public Library at the time the collection was given and includes detail about the Reverend Foster’s life.

SOURCE OF ACQUISITION: The sermons and oration were presented to the CFPL in 1876 by Nathaniel Seaver, Jr.