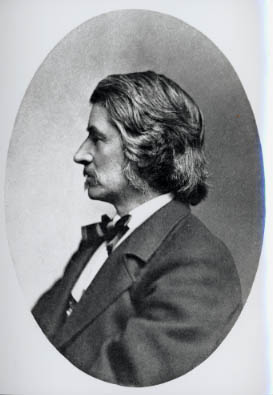 BIOGRAPHY: Franklin Benjamin Sanborn was born in Hampton Falls, New Hampshire on 15 December 1831. He was the son of Aaron Sanborn, a farmer and town clerk, and Lydia (Leavitt) Sanborn. He entered Phillips Exeter Academy in 1851 and enrolled at Harvard College as a sophomore in 1852. Sanborn graduated from Harvard in 1855, seventh in his class. While a student there he began a friendship with Ralph Waldo Emerson, having read Emerson's works extensively. As a result of this relationship, Emerson engaged Sanborn to begin a small private school in Concord that was attended by Emerson's children, as well as those of Hawthorne, Henry James, Horace Mann, and John Brown. Touring the west during the summer of 1856 to report on the progress of Free-Soil agitation, Sanborn became acquainted with John Brown. He subsequently brought Brown back to Concord in 1857 and raised money for him. He also knew of Brown's planned attack on Harpers Ferry and as a result was asked to testify before a Senate committee during the Brown trial. When he refused, he was arrested and an attempt made to seize him. Sanborn's captors were presented with a writ of habeas corpus prepared by Judge Ebenezer Rockwood Hoar and chased out of town. The court ordered Sanborn discharged the following day.

Sanborn closed his school in 1862 and became the editor of The Boston Commonwealth. In 1863 he was appointed secretary of the Massachusetts State Board of Charities and over the next two decades was responsible for the passage of charity and penal legislation in Massachusetts and other states. Between 1865 and 1874 Sanborn helped to found the American Social Science Association, the Clarke School for the Deaf, the Massachusetts Infant Asylum, the National Prison Association, and the National Conference of Charities and Correction. In 1879 he was appointed General Inspector of Charities and held that position until 1888. Sanborn also wrote and lectured. His friendships with many of those connected with the transcendentalist movement resulted in a series of biographies that included those of Thoreau, Bronson Alcott, Hawthorne, Emerson and others. In 1879 he helped to establish the Concord School of Philosophy.

Sanborn was married twice: to Ariana Walker in 1854 for just eight days until her death; to his cousin Louisa Augusta Leavitt in 1862 with whom he had three sons. He died in 1917 at his son's home in Plainfield, New Jersey at the age of eighty-five. The burial service was held at the First Parish Church in Concord, Massachusetts.

SCOPE AND CONTENT: Series I contains accession information relating to parts of the collection, specifically a letter from Lulu M. Blake (Mrs. Hallie C. Blake) to Judge Prescott Keyes dated 21 May 1936 regarding the passing of materials from Blake to Keyes. Series II consists of manuscripts, notes, and receipts relating to Sanborn's work and personal interests which include Theodore Parker, anti-slavery (John Brown), and the care and treatment of the insane; receipts include two relating to the attendance of John Brown's daughters at Sanborn's school. Series III consists of correspondence between Sanborn and others including John Brown, Ellery Channing, Thomas Wentworth Higginson, Julia Ward Howe, Theodore Parker, Elizabeth Peabody, and Charles Sumner.

SOURCES OF ACQUISITION: Sarah Sanborn letter, "Recollections of Miss Sanborn of the Channing Episode" (n.d.; in folder 18) purchased from the Barrow Bookstore. Postcard to Miss S. M. Lawrence (1916 Mar. 17; in Folder 40a) presented by Wanda Null on behalf of the Acton Memorial Library. ALS, FBS to "Dear Madam" (1880 Dec. 7; in Folder 55) purchased of Up-Country Letters, 2011 Feb.

NOTES/COMMENTS: There are other Sanborn collections and Sanborn-related materials in the Concord Free Public Library Special Collections.

Folder 4.
Sanborn transcript: "The Care and Treatment of the Insane: A Paper Read at the Convention of the County Superintendents of the Poor of New York . . . ," 1901

Folder 6.
Ms. "John Brown of Asawatomie—A History, not an Apology" In the hand of John Brown, Jr., with introductory paragraphs in hand of F. B. S. (1883)