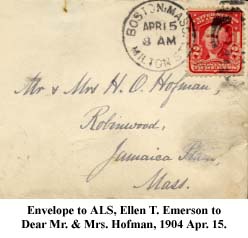 BIOGRAPHY:  The oldest son of William and Ruth (Haskins) Emerson, William Emerson (1801-1868) was two years older than his brother Ralph Waldo Emerson.  He became a lawyer in New York City and married  Susan Woodward Haven  in 1833.  They lived on Staten Island.  William Emerson retired to Concord, Massachusetts, returning to New York City after his wife’s death.  He died September 13, 1868.

Ralph Waldo Emerson (1803-1882) was an American philosopher, essayist, poet, lecturer, Transcendentalist, and prominent citizen of Concord.  Emerson and his wife, Lidian (Jackson) Emerson (1802-1892) had four children including  Ellen Tucker Emerson (1839-1909) and Edward Waldo Emerson (1844-1930). The youngest of four, Edward attended Harvard College from 1861 to 1866.  After graduating from Harvard Medical School in 1874, he became a doctor and practiced medicine in Concord until 1882.  He married Annie Shepard Keyes (1847-1928) in 1874. They had seven children.  After Ralph Waldo Emerson’s death Edward turned to painting, writing, and editing his father’s works.

Ellen Tucker Emerson (1839-1909), the first daughter of Ralph Waldo and Lidian lived in Concord throughout her life.  She did not marry.  Her adulthood was devoted to family, community, and religion.  As Emerson aged, she helped him in a variety of ways, as a traveling companion and an assistant.

Raymond Emerson (1886-1977), the youngest child of Edward and Annie Keyes Emerson, lived in Concord.  He married Amelia Forbes in 1913, became a civil engineer and later an investment manager.

George Barrell Emerson (1797-1881) was an educator and author of A Report on the Trees and Shrubs Growing Naturally in the Forests of Massachusetts (1846).  Like his distant cousin Ralph Waldo Emerson, he descended from Thomas Emerson of Ipswich and from Thomas's son Joseph.