Volumes from the District Library No. 7 Collection, Concord, Massachusetts, 1839-1843 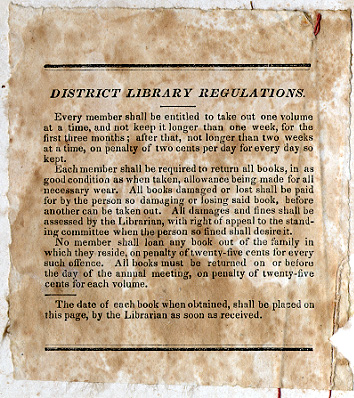 History:   Organized in 1840, the District Library Association No. 7 of Concord, Massachusetts, first assembled just three years after the state of Massachusetts passed legislation allowing school districts to raise money for the establishment of such libraries.  The District 7 library was accessible to anyone willing to pay the membership fee, and therefore served not only schoolchildren but also the adult citizens of the surrounding community.  Publishers responded to the new demand for educational texts by publishing instructive series similar to the three contained in this collection (all published by Marsh, Capen, Lyon, and Webb of Boston).

The most significant documentation of Concord’s District Library Association No. 7 is a handwritten record book that contains the rules and regulations established by the Association at its first meeting on March 9, 1840 (CFPL, Vault A60, Unit A4).  The record volume includes a list of the original paying members of the Association (including the amount of their initial donation), as well as entries summarizing the election of officers by the Association at annual March meetings between 1840 and 1858.  It is unclear precisely when and why the District 7 library went out of existence.  However, its termination occurred at a time when the public library movement was gaining noticeable support and after the Concord Town Library (predecessor of the Concord Free Public Library) had been established.

At the first recorded meeting in 1840, members of the new Association established the following regulations:

We the subscribers, sensible of the utility and advantage which would be derived from a cheap and easy access to Books, do for that purpus form ourselves into an association: to be called the District Library Association No. 7; And for the purpose of carrying into affect the above design, we do agree to be governed by the following rules and regulations.

Viz. Art. 1st.  There shall be an annual meeting of the Association on the second Monday of March annually, to chuse a President whose duty shall be to preside at all meetings of the association.  Art 2nd There shall be chosen at the same time annually a Libraryan, who shall act as Secretary and Treasurer, whose duty shall be to keep a strict account of all Books belonging to this association, assess all damages, collect all fines, and receive all subscriptions from those who are desireous of becoming members.  Art 3rd There shall [be] chosen a standing Committee annually whose duty shall be to examine all Books before admitted into the Library, settle difficultyes between members and the Libraryan if any should occur, and report annually the state of the Library.  Art 4 There shall be no Books introduced into the Library favouring political or sectarian subjects.  Art 5th Every person residing in the District who shall pay twenty five cents or more and conform to the rules and regulations shall be entitled to all priveliges of the Association.

Scope and content:  The collection consists of books that formed part of Concord’s District Library No. 7.  The 38 volumes were published between 1839 and 1843, and consist of three series published under the sanction of the Board of Education of the State of Massachusetts.  The majority of the titles are intended for schoolchildren, with a few aimed specifically at young women.  The three School Library series are quarter bound black leather with cloth-covered boards, while the remaining three volumes are bound in full leather.

Each book contains a plate stating the “District Library Regulations” on the front paste-down endpaper, with the exception of The Useful Arts (vol. 1) and The Juvenile Budget Opened, in which it can be found on the back paste-down endpaper.

Sources of acquisition:  Presumed gift of the Lawrence family, prior to 1996.

I.  The School Library series, published under the sanction of the Board of Education of the State of Massachusetts.  Vols. 2-15, 17-26:

Vol. 1. …Lives of John Stark, David Brainerd, Robert Fulton, and John Smith.  xii, 364 pages.   Inscribed on the head of the back lining leaf are two drafts of a note to “Mrs. Tarbell”.  The bottom half of the page has been cut out.

Series vol. XIII:
Story, Joseph LL.D.  A familiar exposition of the Constitution of the United States: …designed for the use of school libraries and general readers.  With an Appendix, containing important public documents, illustrative of the Constitution.  (Boston: Marsh, Capen, Lyon, and Webb, 1840).  372 pages.  Bookplate dated: Sept. 3, 1840.

Series vol. XVIII:
Phelps, Mrs. Lincoln.  The fire-side friend, of female student: being advice to young ladies on the important subject of education.  With an appendix, on moral and religious education, from the French of Madame de Saussure.  (Boston: Marsh, Capen, Lyon, and Webb, 1840).  377 pages.  Bookplate dated: Sept 3, 1840.

Series vol. XIX:
Everett, Edward.  Importance of practical education and useful knowledge: being a selection from his orations and other discourses.  (Boston: Marsh, Capen, Lyon, and Webb, 1840).  419 pages.  Bookplate dated: Jan 5, 1841.  Signatures of Joshua Lawrence on bookplate, and of Nathan Barrett on front lining leaf.

Series vol. XX:
Olmsted, Denison A.M.  Letters on astronomy, addressed to a lady: in which the elements of the science are familiarly explained in conexion with its literary history.  (Boston: Marsh, Capen, Lyon, and Webb, 1842).  419 pages.  Bookplate dated: Nov 25, 1842.

Series vol. XXI:
Potter, Alonzo, D.D.  The principles of science applied to the domestic and mechanic arts, and to manufactures and agriculture: with reflections on the progress of the arts, and their influence on national welfare.  (Boston: Marsh, Capen, Lyon, and Webb, 1842).  444 pages.  Bookplate dated: Nov 25, 1842.

Series vol. XXVI:
Beecher, Catherine.  A treatise on domestic economy, for the use of young ladies at home, and at school…revised edition with numerous additions and illustrative engravings.  (Boston: Marsh, Capen, Lyon, and Webb, 1842).  383 pages.  Bookplate dated: Nov 25, 1840.

II.  The School Library. Juvenile Series, published under the sanction of the Board of Education of the State of Massachusetts.  Vols. III, IV, VII - XII.  Bookplates dated: Nov 29, 1842:

Series vol. IV:
Hale, Mrs. Sarah J.  The juvenile budget opened: being selections from the writings of Doctor John Aikin, with a sketch of his life..   (Boston: Marsh, Capen, Lyon, and Webb, 1840).  288 pages.  Signature of Abbott J. Lawrence on back lining leaf.

Series vol. X:
[Berquin, M. (Arnaud)].  The Child’s friend: being selections from the various works of Arnaud Berquin.  Adapted to the use of American readers.  With a sketch of his life and writings.   (Boston: Marsh, Capen, Lyon, and Webb, 1840).  252 pages.

Series vol. XI:
[Massachusetts Board of Education].  The Lives of Christopher Columbus, the discoverer of America, and Americus Vespucius, the Florentine, with engravings.  (Boston: Marsh, Capen, Lyon, and Webb, 1840).  278 pages.  Signature of John L. Edmun on front free endpaper.  Rubbing of an Indian Head penny on front lining leaf.

Series vol. XII:
[Massachusetts Board of Education].  The Lives of Vasco Nunez de Balboa, the discoverer of the Pacific Ocean, Hernando Cortes, the conqueror of Mexico, and Francisco Pizarro, the conqueror of Peru.  (Boston: Marsh, Capen, Lyon, and Webb, 1840).  276 pages.

Potter, Alonzo and George B. Emerson.  The School and the schoolmaster.  A manual for the use of teachers, employers, trustees, inspectors, &c., &c., of common schools.  In two parts.  (Boston: Wm. B. Fowle & N. Capen, 1843).  552 pages.   Bookplate not dated.  Inscribed on front free endpaper: “This Volume Belongs to District 7.”  Signature of Joshua W. Lawrence on front free endpaper.