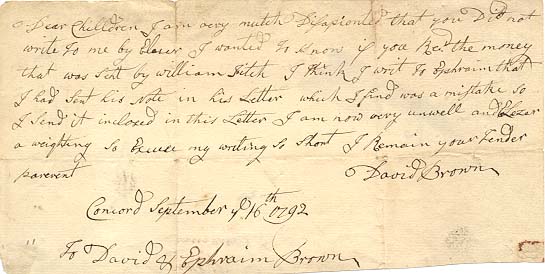 ALS, David Brown to Dear "Chilldren", 1792 Sept. 16
Not to be reproduced without permission from the Concord Free Public Library.

BIOGRAPHY: Farmer, selectman, patriot, regimental captain of the American Revolution, Concord civic leader. Born in Concord, Mass. In 1732, the sixth of nine children of Ephraim Brown and Hannah Wilson. Married Abigail Munroe, Oct. 7, 1756. Ten children: Purchase (b. 1757); Sarah (b. 1761); Abigail (b. 1762); David (b. 1764); Ephraim (b. 1765); Elizabeth (b. 1767); William (b. 1768); Thomas (b. 1771); Ruben (Reuben, b. 1773); Joseph (b. 1776). There may have been one or two other children whose births were not registered in Concord Vital Records; see The Minutemen and Their World, by Robert A. Gross. Inherited the family homesite on the Old Groton Road from his father. Held a number of offices in Concord (Surveyor of Highways, Constable and Firewarden); member of town committees. Captain of a company of minutemen who fought against the British at the North Bridge, Apr. 19, 1775. Longstanding member of the Committee of Correspondence during the Revolutionary period. Delegate to the state conventions in 1779. Ran unsuccessfully for state senate in 1789. Member of the Social Circle of Concord. Remained active in town affairs until his death at age 69 on May 22, 1802. Involved with a 1774 land grant on the west shore of Lake Sebago, known as Flintstown, later renamed Baldwin (now Maine). This grant replaced an earlier grant of 1736 given by the Governor of Massachusetts to a group of Massachusetts men who had fought against the Indians. The original group lost their grant when the boundary was drawn between Massachusetts and New Hampshire. The second grant went to the survivors of the earlier group and involved Capt. John Flint of Concord. Two of his sons, Ebenezer Flint and John Cummings Flint settled in Flintstown and became prominent citizens. Two of Capt. Brown’s sons, Ephraim and David, also settled there. In his will, Capt. Brown left his interest in the Flintstown grant to this sons Ephraim and David and his farm to his widow and son Joseph. According to town records, the house had already been built by 1664. The Capt. David Brown House is no longer standing. It was torn down in 1865. The site has been excavated by the National Park Service and has been studied and documented in Captain Brown’s House by R. Torres-Reyes of the Minute Man National Historic Park because of its close proximity to the Concord Battle Ground. Capt. Brown is buried in Concord at the Old Hill Burying Ground cemetery next to his sons: Thomas (d. 1798) and Joseph (d. 1821). (Biographical information obtained from The Centennial of the Social Circle in Concord, Mar. 21, 1882 and Captain Brown’s House by R. Torres-Reyes. Detailed information about the Flintstown grant may be found in Flint Family History of the Adventuresome Seven by Edward F. Flint, Jr.; S.M. and Gwendolyn S. Flint and Saco Valley Settlements and families by G.T. Ridlon, Sr.).

SCOPE AND CONTENT: Letters, 1792-1800, from Capt. Brown to his sons, David and Ephraim Brown of Flintstown. Letters concerned primarily with family matters, in particular, illness (especially illness of son William), marriages, births, deaths and burials; also mention business transactions related to Flintstown. Letter of July, 1792 refers to illness of sons William and Joseph. Letter of Oct., 1794 refers to health of sons William and Ruben and daughters Sally and Nabby. Letter of Nov., 1794 mentions death of Purchase’s wife following childbirth. Letter of Feb., 1796 refers to a financial transaction with John Cummings Flint and to son Purchase’s remarriage to the Widow Mason of Concord; refers also to the death of Uncle Ephraim Munroe. Letter of June, 1798 refers to marriage of daughter Betsey to John Hodgeman and death of Uncle Elias. Letter of Feb., 1800 refers to son Purchase burning his foot with a ladle of hot potash.

Back to the Selected Finding Aids Page