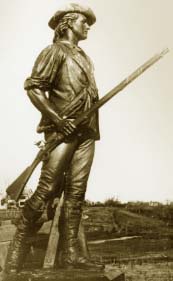 Not to be reproduced without permission from the Curator of Special Collections, Concord Free Public Library

EXTENT: 13 items, plus one folder of accompanying material.

BIOGRAPHY: Sculptor Daniel Chester French, one of America’s greatest public artists, was born in 1850 in Exeter, New Hampshire. His father was Henry Flagg French, a lawyer, judge, and, later, Assistant Secretary of the United States Treasury. The Frenches moved to Cambridge when Dan was six, then to Concord in the 1860s, to a house on Sudbury Road (now #342). French’s artistic talent was first noticed by his stepmother, who was impressed by the little figures he carved out of turnips and pieces of wood. Artist May Alcott (Louisa May’s youngest sister) took an active interest in helping him develop his skills. She gave him her modeling clay and tools, and advice on how to use them.

Although French failed several subjects at M.I.T. and left the school without a degree, he learned quickly as an artist. He studied with William Morris Hunt and William Rimmer in Boston and worked in the New York studio of John Quincy Adams Ward. His earliest subjects were his family and friends, who sat for portrait busts.

Concord’s award to French of the commission for the Minute Man statue—created and located at the North Bridge as part of the town’s 1875 commemoration of the centennial of the Concord Fight—established him as a public artist. When the Minute Man was unveiled in 1875, French was in Florence. On his return from Europe in 1876, he set up a studio in Washington, resettled in Concord in 1878, and in 1879 built a studio next to his family’s home on Sudbury Road.

In 1879, early in his career, French created a bust from life of Ralph Waldo Emerson, a French family friend who had encouraged Dan in his work. Later, he sculpted the seated Emerson, unveiled in 1914, which dominates the lobby of the Concord Free Public Library.

In 1884, French executed the seated bronze figure of John Harvard located in the Harvard Yard. In 1892, he received an award at the Paris Salon for his statue of Dr. Gallaudet and his first deaf-mute pupil. From 1912 to 1915, he chaired the National Commission of Fine Arts.

In 1888, French married his cousin Mary Adams French. They made their home in New York City, summering in Massachusetts and New Hampshire. In 1897, he purchased an estate in Stockbridge, Massachusetts to serve as his summer residence. He named the place Chesterwood, built a studio on the property (complete with a railroad track to push pieces of sculpture outside into the natural light), and there created his best-known work, the seated figure of Abraham Lincoln unveiled at the Lincoln Memorial in Washington, D.C. in 1922. French died at Chesterwood in 1931.

SCOPE AND CONTENT: Thirteen letters, 1873-1931, from and to Daniel Chester French. Five letters (dated 1873-1874) relate to the modeling and casting in bronze of and the preparation of a granite base for French’s Minute Man statue. Two of these were written by French to members of Concord’s Monument Committee for the 1875 celebration (which included John S. Keyes, George A. King, and George M. Brooks, among others), one to French by John S. Keyes on behalf of the committee. One letter was written by George Arms of the Ames Manufacturing Company in Chicopee, Mass., quoting a price for casting the statue. Another was written by sculptor John Quincy Adams Ward (French’s mentor) to offer advice on the casting. The remaining six letters in the collection (dated 1880-1931) touch upon a variety of professional and personal matters. An 1887 letter to Frank Miles Day was written to accompany a photograph of French for a book by Day. One—a thank-you note for the present of a tea-kettle (a wedding gift?)—was written by French in 1888 to Mary Dillingham Brooks (Mrs. George M. Brooks). Another was written in 1894 to Louis A. Holman (art editor of the New England Magazine from 1890 to 1896) about a magazine illustration of one of French’s works. French wrote Newton Mackintosh in May 1908 about visiting Concord to “see about the Melvin Monument in Sleepy Hollow.”  French wrote Mary Noyes in 1914 to express thanks for her condolences upon the death of his brother, William Merchant Richardson French, in Chicago. In a letter dated 1931, French wrote George Frederick Robinson (a Watertown resident who summered in Concord, and the father of Concord historian Ruth Robinson Wheeler) to answer Robinson’s query about the relative merits of two processes of casting bronze and to express sympathy over the final illness and impending death of Mrs. Robinson. Other correspondents represented in the collection include Concordians Mary Rodman and Prescott Keyes.

ASSOCIATED MATERIALS: The Library of Congress owns the major collection of French papers. The Concord Free Public Library, in addition to this separate collection of French correspondence, holds several other collections including letters by French. French’s touching letter from Florence declining Concord’s invitation to be present at the unveiling of the Minute Man in 1875 is found among the Hoar family papers (Vault A45, Hoar, Unit 1). Correspondence to William Torrey Harris (Vault A35, W.T. Harris, Unit 1) includes a letter written by French 1890 Jan. 7 about designing a bust of Alcott and enclosed with a letter from F.B. Sanborn to Harris (1890 Jan. 12). The John Shepard Keyes papers (Vault A45, Keyes, Unit 2) contain letters written by French about the preparation of a statuette version of the Minute Man for the U.S.S. Concord (the finished bronze piece presented by the Town of Concord to the U.S. Navy in 1891). The Keyes-Brown family papers (Vault A45, Keyes, Unit 3) feature letters by French about the creation of the seated Emerson unveiled in the Concord Free Public Library in 1914. The records of the Nineteenth of April Committee for arranging the 1925 celebration in Concord of the 150th anniversary of the Concord Fight (Vault A15, Unit C4) include a letter from French declining an invitation to design a commemorative coin for the occasion. Contact the CFPL Special Collections for information about these and other holdings relating to Daniel Chester French.

ALS, Daniel Chester French to John S. Keyes, Concord, 1873 Nov. 3 (copy of original in a hand other than French’s). DCF agrees to model a figure of the Minute Man for Concord’s 1875 celebration of the centennial of the Concord Fight, asks to receive payment for materials "as fast as needful," and leaves his compensation to the discretion of Concord’s committee for arranging the statue. Transferred from CFPL Letter File (formerly Letter File 3, F1).

ALS, Daniel Chester French to John S. Keyes, Florence, 1874 Nov. 28. DCF expresses surprise and regret over the Monument Committee’s specifications for the statue’s granite base, and sends a sketch (not included with the letter as purchased by the CFPL) illustrating his own preferences. Purchased of Doug Fish (via eBay), 2000 May 1. Accessioned 2000 May 5 (AMC 039).

ALS, Daniel Chester French to “Dear Mr. Day” [Frank Miles Day], Concord, 1887 Oct. 27.  DCF sends a  photograph of himself as a young man to be used in a book by Day (photograph not included with letter).  Purchased of Extant Americana, 2013 Nov. 22.

ALS, Daniel Chester French to Louis A. Holman, New York, 1894 Nov. 11. DCF compliments Holman on a magazine illustration of one of his bronze reliefs. Purchased of Scott Petersen, 1998 Oct. 26.

TLS, Daniel Chester French to Prescott Keyes, Glendale, Mass. [Chesterwood], 1907 Aug. 30, on letterhead. DCF writes, "Have you forgotten that you were going to fix me up for life, if not, for death." Transferred from CFPL Letter File (formerly Letter File 3a, F3).

TLS, Daniel Chester French to Newton Mackintosh, Glendale, Mass. [Chesterwood], 1908 May 27 (on letterhead).  DCF refers to plans to “see about” the Melvin Memorial in Concord, and asks Newton to go back with him to Glendale a few days later.  Purchased at online auction from Michael P. Preckol, 2016 Apr. 7.

ALS, Daniel Chester French to Miss Mary Noyes, Glendale, Mass., 1914 June 18, on letterhead. DCF responds to Miss Noyes’s condolences on the death of his brother in Chicago and refers to a recent visit with her in Concord. Purchased of Scott Petersen, from the Bonnie Bracker Fund, 1994 Jan.

TLS, Daniel Chester French to G. Frederick Robinson, Glendale, Mass., 1931 July 16, on letterhead. DCF writes Robinson at Fairhaven Bay, Concord, responding to a query about the relative merits of two processes of casting bronze, and expresses sympathy over "the tragedy that has come into your house." Transferred from CFPL Letter File (formerly Letter File 3a, F4).